I realize what it means to choose citizenship – US or Korean

I’m on a Face Time call from Evanston to Arizona. I was supposed to be in Arizona to see Alicia during this time of spring break, but the fear of carrying the virus by plane stopped me from traveling.  As I write this, the entire world is on halt because of the coronavirus pandemic. Instead, I call Alicia, asking her how she’s doing.

On the phone, Alicia makes a worried face and asks me if I am flying back home to Korea. Although Korea has been shocked by the pandemic too, the situation now seems to be under control. Many friends who were in the States studying like me have flown back home, looking for the safety and comfort with their families.

I ask Alicia if she’s flying back to Korea. She says she can’t. What do you mean you can’t? Alicia explains that her passport is being held by the USCIS (U.S. Citizenship and Immigration Services) because she is finally getting her American citizenship. She says she is giving up her Korean citizenship.

Alicia tells me that I should go back because it would be safer for me to be in Korea with easier access to medical care and support. What about her? She says the free medical care to which Koreans are entitled will not be available for her anymore.

With public health insurance in South Korea, it is easier to get tested and treated for the virus. Everyone who enters the country gets tested by the health department at the airport. After two weeks of quarantine, they can visit a local health center for a retest. When people are in self-isolation, the government sends them boxes of daily necessities and food. Seeing how the spread of the virus is managed back home, many friends have to go back rather than stay in the States. 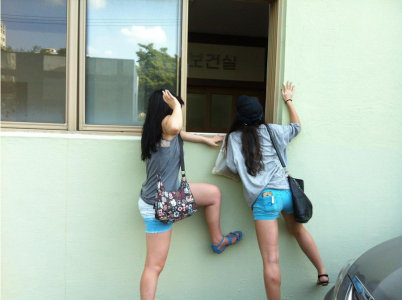 Alicia and me visiting our middle school after graduation in 2012.

Ten years ago, Alicia and I were both in the same place – a public middle school in Busan, Korea. We were16-year-old girls who had not seen the world outside Korea yet, without any clue of the changes we’d be experiencing during the next decade. There was a wave in Korea of people going to the States for higher education.

In our senior year of middle school, I applied to the boarding school in Korea which offered an American education system, and a way to go to college in the States. Alicia decided to attend an exchange program in an American high school. She first lived in a homestay house in Arizona by herself. Because the exchange program visa expired after a year, she flew back to Korea and waited for her green card to be issued. After a year of waiting, the green card was approved, allowing for her entire family to move to Arizona and for Alicia to go back to her high school. Alicia’s father had been planning ahead for the family’s future in the States. He’d applied for the visa years earlier, and after thirteen years, it was approved.

Even though Alicia’s passport was being held up, it meant she’d become a US citizen. I was elated that her long process of immigration had been completed safely. At the same time, I realized what she was trading by being an American citizen. You realize what you’ve given up only often when you find it needed. Public medical care, which is available for any citizen in Korea, is not available to her anymore. 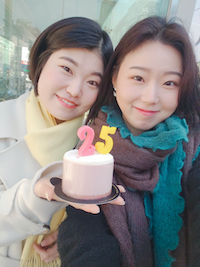 I also realized the changed status between us. I’ve seen Alicia staying in the States for the past ten years, but it never occurred to me that she’s not Korean. As we’ve grown up from the same Korean culture, she’s always been the same person to me regardless of citizenship status. Most things will remain the same for us as they were before. We will both travel back and forth from Korea to the States and visit each other frequently. We will both talk in English and Korean.

Although she will be part of Korean culture as long as she wants, now she legally belongs to the States. She is finally an American. I didn’t know that being an American meant that you can’t be Korean. You have to give up one to be the other. Alicia will experience life as an American citizen in the States that I’m not aware of. We will experience different challenges in our lives. I hope we can be still there for each other regardless of the distance across national borders or our nationalities.