I watch raindrops roll down the windshield from the passenger seat as my mother drives down the highway on another dark winter day in the Pacific Northwest. The radio plays quietly, muffled by the downpour and our loud conversation.

Like many times before, I ask my mother why she never once returned to Ethiopia. I ask her, for the first time, how she would feel if I left the country and never saw her for 20 years. My eyes keep a steady focus on the rain, and I don’t notice the tears streaming down her face.

I can recall questioning my mom about why she left from the time I was small. Over the years she always gave the same short reply, and would say that when she left Ethiopia, she wanted to leave everything behind. So I grew up in small-town white suburbia just about the same as everyone else.

Just like my mother, I’ve always been a bit headstrong. That day in the car wasn’t the first time we went through the motions of that exchange. We had gone back and forth many times on the subject over the years, each of us making the same points and complaints until we both came to a resigned semi-understanding. In the car with my mind running at full tilt, I didn’t turn to look at her until I noticed the absence of her usual spirited reply as she recalled the memory of her mother. 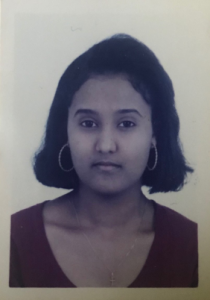 My mother at 17 years old. [Photo credit:Taken around 1974 by a professional photographer in Addis Ababa, Ethiopia for a city ID card]

My mom left Ethiopia in the midst of a civil war to travel to Bahrain when she was 17 years old, having paid for a false birth certificate to make her a legal adult able to travel by herself.

She had lived an extremely privileged life with her father. She had graduated high school about two years before, and was still running around jumping rope and playing basketball with her friends and siblings. At the same time, she was working part-time at UNICEF, running errands and taking typing classes in the summer, but her work life was mostly for show. It was a way to keep her busy, and for her father to demonstrate that his daughter was capable. She could’ve never worked a day in her life if she wanted to, but my mother always wanted to do her own thing, so her work was a subtle way to make her own path.

Born in Ethiopia, her father was wealthy, a prominent general in the country. He started as a soldier, and worked hard to earn his ranking as a general. He was in charge of a district at the border between Somalia and Ethiopia, and was well known throughout the country. When her parents divorced, her father took full custody of my mother and her siblings.

“I was mad. My mom never had an opportunity or choice to take us. I didn’t know her until after eighth grade, then our relationship started,” my mother said. “I was mad at my dad for taking us.”

She lived with her father in a military base in the capital city of Addis Ababa for most of her childhood. He gave her and her siblings the best of everything, but his new wife treated them poorly. He knew they had full stomachs, but he didn’t know the stories about her.

She was treated akin to a princess in Ethiopia. She had a driver who took her to school, though she wanted to walk to school like everyone else. She convinced people on the base to take her on joy rides in tanks with her siblings, swearing to never tell. She wore fine dresses, but wanted to run around in jeans. When she went to the market, her father knew where she went, with whom, and what she had bought before stepping foot into the house. People stood up when she entered a restaurant, because they knew who her father was. She’d seen world leaders like Fidel Castro. Once, she presented flowers to the president of the country alongside her father.

When the civil war began, none of that mattered. Ethiopia was becoming a communist country. Eritreans wanted to separate themselves. State by state, Eritreans occupied and claimed parts of Ethiopia to begin forming its own country. My mother said they would watch the news on TV, as they reported on what cities they’ll be in and by what day.

Her father, a prominent figure working under the Ethiopian government, was taken by the Eritreans as a political prisoner just before my mother graduated high school. Everything in their home in Addis Ababa was taken, so my mother and her siblings left the capital with just their clothes. They were taken for questioning, asked over and over if they knew if her dad was hiding money and where it was, before they fled to other homes. He had been bought a car in my mother’s name. “I was thinking you don’t care if I eat or if I’m alive. It was just a way for him to keep stuff for himself,” my mother said.

“He never gave me money if I asked for some to buy pencils, I was just supposed to get it for him.” So the government took the car before anyone had even sat in the driver’s seat.

Her father gave her and her siblings some money each as the news stories  reported of forces approaching Addis Ababa. They had enough to make their way to the Middle East.  It was about a year and a half of being checked in on and living in this state of fear before she was able to receive a visa to Bahrain.

“It was a nightmare. You can be in the house, and three or four people might bust down the door. It happened twice,” my mother recalled. They were checked on regularly. “At a certain point they had to realize we didn’t know anything, so they mostly left us alone, but there was no authority. People would shoot through houses for no reason at noon. You could get shot in the street and nobody would ask why.”

She said that it was hell, and that she would rather go to a different hell than the one she was in. So off she went to Bahrain with a contract signed to babysit for a wealthy family with a child on the way.

My mother and me on a Sunday afternoon after going to church. Feb. 2005 [Photo credit: My dad]

Her response that afternoon in the car caught me by surprise. My heart  with shame for the callousness in which I spoke when I saw the tears in her eyes as she thought of her own mother. While she always spoke with unwavering confidence, I saw for the first time how difficult the decision to leave everything behind was. All her life, she knew the path she wanted, and was certain to make it hers, no matter the obstacles in front of her.

“I was always a little different. I wanted to run around in pants, and learn things that weren’t for girls,” she said. “My mom said I was like a flower in a field of weeds.”

My mother at 17 years old. Taken around 1974 by a professional photographer in Addis Ababa, Ethiopia for a city ID card (her true age is unknown, the year it was taken is not certain).

A picture of my mother and I taken in February 2005 by my father on a Sunday afternoon after going to church. I’m four years old, and at this point my mother has been in the U.S. for seven years.

Not quite a headshot, but I don’t have professional photos.