CNN is on the kitchen TV, the New York Times newsletter is on my laptop, we’re drinking our morning french press, and my grandmother is telling anyone who will listen all the news that has anything to do with Israel. Savta, as I call her in Hebrew, is frequently—and lovingly—teased by the whole family for her obsession with anything relevant to the Jewish people or the country where she and my father were born.

This is mostly charming, but occasionally embarrassing—a combination of sentiments that sums up my experience as the child and grandchild of immigrants on one side. When we visited Italy, Savta was riveted by tales of the segregation of Jews into ghettos and the star of David patterns she found on an old cathedral mosaic. She had less luck asking our tour guide about Jewish history in Japan. 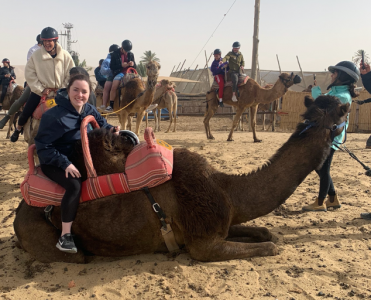 Me camel-riding in Israel on Birthright, Dec. 2019.

Despite my family’s occasional cringing at her hyperfocus on All Things Israel, Savta has never been anything but earnest and unashamed of my family’s begrudging participation in prayers and celebration. She never minded that we dragged our heels when we were shepherded to Sunday school or when we complained about how hungry we were on Yom Kippur, the holiest holiday in Judaism. She never even criticized us during the times we chose not to fast at all. In a way, that’s what has made embracing my Jewish identity easier than anything else. Instead of judging us for our Americanization and lack of connection to our heritage, she focused on enjoying the moments when we embraced it wholeheartedly. That more than anything has taught me to focus on the parts of being Jewish that I enjoy, taking the good with the… not bad per se, but with the overly mystical stuff of God creating the world-and then flooding it.

Though I eye-rolled through most of my family’s private and incredibly lax self-isolation Passover Seder, I was glad that we broke out the Ravid Family Haggadah (custom-printed, natch, because sometimes in such a concentrated community of Jews devoutness gets competitive) and belted our best Dayenu. I don’t think that there has been a single family car ride to a Jewish event or party that has passed without someone in my family voicing a mild complaint or joke at our pseudo-Judaism’s expense.

If you’d asked me a year ago why I went to or hosted Jewish holiday celebrations aside from using them as an excuse to see my Jew Crew, I likely wouldn’t have been able to articulate why other than, “because it’s what we’ve always done.”

I still don’t know if I can explain myself any better, but I know that something has changed. When my sisters both voiced during Seder that neither planned to raise their kids Jewish, I was shocked to find myself a bit hurt, telling them a bit testily that they’d change their minds on Birthright (the trip in which the Israeli government funds young people of Jewish descent on a trip to the homeland) and decide they wanted to marry Jews, as had happened to many of my friends. I’d already decided that my kids, if I have them, would become Bar/Bat Mitzvahs, if only because I love planning a good party. Was this the first step of turning into my Savta?

My dad, though born in Israel, is more divorced from Hebrew tradition than the rest of us. Maybe that, too, is a defense mechanism. When he moved to Chicago, he was a skinny five-year-old who didn’t speak a word of English. Now he acts as though he has no connection at all to the place he was born. I know that it still has a hold on him because he makes the point to emphasize the disconnect, likely because in the early ’70s it wasn’t easy for an Israeli kid in the U.S. I see it in the way he’s such a stickler for proper English grammar. I see it in the way he fondly asks my grandmother why she continues to mispronounce the name of the town she’s lived for five decades despite knowing better.

It’s easier to distance yourself from the things that have the power to hurt you than it is to embrace them. Being an immigrant, or being a Jew, are not things anyone should feel embarrassed about, yet they are sensitive topics, because these brilliant things can also bring discrimination rather than celebration. Sometimes it’s easier to sterilize yourself into a picture-perfect nuclear American than it is to live as anything else.

Savta doesn’t begrudge my dad for practicing self-isolation from anything Israel-related for his entire life. At the end of the day, he’ll still sing along to the prayers with her. As will my sisters; as will my mom (who is neither on key nor Jewish, but usually more earnest than the rest of us); as will I. Culture ebbs and flows. So what if my family’s Jewish future doesn’t match my grandmother’s past? Savta has shown me that tradition doesn’t stagnate. It grows and adapts along with us.