How have Chinese students handled what to do as the spread of COVID-19 limited their options to return to China?

Alina Zhu planned to fly home to Shanghai in March. About two months later, she was still in Houston.

Zhu’s parents wanted her home after Rice University, where Zhu is a rising junior, announced that all classes would be remote starting March 23. She asked to stay a few more days to say goodbye to friends, she said. Almost immediately afterward, her passport was stolen, leaving her stranded in the U.S.

Zhu’s missing passport is only one of the reasons she can’t leave. Although Shanghai has been her home for seven years, she was born in Seattle. On March 28, China suspended travel into the country by foreign nationals. Because Zhu has a U.S. passport, she won’t be able to return home until China opens up again. Until then, all she can do is apply for a new passport and wait.

Travel plans left Chinese students up in the air so many stayed put in the U.S.

By mid-March, as the COVID-19 virus spread across the county, schools began moving to online teaching platforms. Some, such as Northwestern University, initially stated that students may be able to return to in-person classes by May. Tiger Wang, a freshman at Northwestern, decided to stay on campus rather than fly home to Beijing. Wang worried that if he went back to China, he might not be able to return when classes resumed, he said.

When Northwestern announced that its spring quarter would be completely online, it was too late for Wang to go home. There were no available flights to Beijing anymore, he said.

Ann Li, a junior at Winchester High School, faced a similar situation. She currently lives with her host family in Winchester, Massachusetts. In March, her school told students that they would return to in-person classes before the end of the semester.

“I thought it was going to end quickly,” Li said. “I don’t know why I thought that.”

While her father wanted her to fly back to Guangzhou, her mother suggested that she stay for two more weeks in case Li could return to school. It was impossible to buy a ticket to go home by the time Li learned that in-person classes would not resume, she said.

Other students initially stayed in the U.S. for different reasons and have faced the same problem of being unable to buy plane tickets. Alex Zhou, a rising junior at the University of Illinois at Urbana-Champaign, didn’t go home to Zhuhai, China. He decided to stay in his apartment in Urbana, because of the time difference. Had he returned to China, his classes would start at night, Zhou said. Even though Zhou’s classes are over now, he’s still unable to fly home due to difficulties in buying tickets.

Jason Wang, a rising senior at the University of California, Berkeley, was already planning on spending the summer in the U.S. In his fall semester, he received a summer internship from Microsoft. The internship became remote in mid-April, but Jason Wang couldn’t go home to Lianyungang, China, because Microsoft required all interns to stay in North America. Even without the internship, he wouldn’t have flown to China this summer because he was unsure whether he’d be able to return to the U.S. in the fall, he said.

When reports of the COVID-19 virus in Wuhan, China, began hitting the news, Jason Wang quickly became concerned. He worried about his grandparents and about himself. One of his roommates had returned from Wuhan after winter break. Wang and all three of his roommates spent the next two weeks watching carefully for any symptoms of the virus. Thankfully, everyone was OK. When cases began popping up in the U.S., they immediately knew that it would spread rapidly. One of Wang’s roommates even had the foresight to buy N95 masks before there was widespread demand.

Sara Qi, who recently received her master’s from Duke University, wasn’t very anxious about the COVID-19 virus in the beginning, she said. As more information became available, her concern increased. In early February, Qi visited China to celebrate Lunar New Year with family. Due to restrictions by the Chinese government, she was unable to go outside. After spending two weeks at home, Qi flew back to Durham, North Carolina.

Qi didn’t expect the virus to impact the U.S. as hard as it has now, she said. Her life hasn’t been severely impacted, but she has friends in other states and she grew concerned about their safety.

Tracy Zhang, a sophomore at Northwestern, also didn’t expect the virus to become a global pandemic, she said. She only began worrying when the first case in Chicago was reported in late January. Her anxiety reached its peak in late March, when Northwestern’s winter quarter ended. Everything happened so fast, she said.

“I didn’t really have time to react to anything,” Zhang said. “I just sort of let it all happen. Then the next second, I think about this whole thing, and I’ve already moved out of my dorm. I’m already in this apartment.” 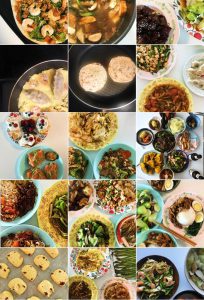 Zhang and her roommates have been making a variety of traditional Chinese dishes. (Photo credit: Tracy Zhang) 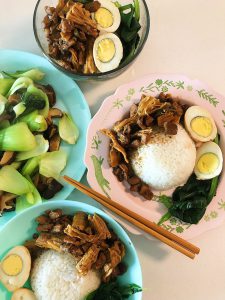 Since then, her anxiety has decreased. She’s doing well. “Totally peaceful and calm,” Zhang said. She’s been waking up around 6:30 a.m. and has started a morning yoga routine. Since moving into their apartment, she and her roommates have been cooking a lot, which they’ve found to be very time consuming. Zhang is still taking classes, since Northwestern finishes its spring quarter in mid-June. She’s practicing for Refresh Dance Crew’s virtual spring show. She’s keeping busy, Zhang said.

Chinese students cope with the pandemic like everyone else

Zhou’s spring semester at the University of Illinois ended in mid-May. Since then, he’s been staying in his apartment with his roommates. He spends a lot of time playing video games. Zhou has also been cooking Chinese food and baking cookies. It releases some of his stress, he said.

Aside from working, Wang is taking it easy. He and his roommates make an effort to stay home, only going grocery shopping every two weeks. He has a stockpile of masks. His parents sent him two boxes, and the Chinese government sent care packages to him and many other international Chinese students. Inside, there is hand sanitizer, masks and medicine to treat COVID-19 symptoms.

Recently, Wang and his roommates at Berkeley have introduced an exercise regimen to their daily routine. They go out for runs or play basketball in empty parks. “We’ve been noticing that, because of the lack of cardio, we’re getting fat,” he joked.

While college students generally find themselves with more free time, Li, who is still in high school, is just as busy as before the pandemic, if not more. She spent April preparing for the AP Statistics and AP Biology tests, which she took online. Li is still working on assignments for school. She meets online with her teachers once or twice a week and covers a lot of material by herself. This makes learning certain subjects, such as pre-calculus, difficult, she said.

Li is also preparing her college applications. She is studying for the SAT even though she is unsure when she will be able to take the exam. She was originally signed up for testing dates in March, May and June, but all three have been cancelled. Her parents and teachers are suggesting that she start on her college admission essays.

Qi feels the same. Ticket prices for June are absurdly expensive, and she’s also worried about getting sick on the flight. She wouldn’t be able to get a direct flight to her home in Dalian, China. She will have to quarantine in a hotel in whichever city she lands in first once she arrives in China. She can then fly to her hometown, where she will have to quarantine again. “I feel like it’s not worth it, so I just decided not to go home,” Qi said.

On the other hand, Tiger Wang is willing to take his chances. He already had flights booked to leave in June. He called the airline on May 21 to make sure that the flights are still good to go.  He’s aware of the quarantine policy. He’ll have to stop in a city outside of Beijing, such as Tianjin, China, and spend two weeks in a hotel before he’s able to fly home. Regardless, he’s excited. He plans on doing research at Peking University for a month, and if they’re able, he and his friends will take a trip around China.

Zhu still hasn’t received a new passport yet. A friend told her that because of the virus, the wait time can be four months, she said. Her spring semester ended on May 6, and since then, she’s moved off campus. She’s come to terms with the prospect that she won’t be able to return to Shanghai for a while. 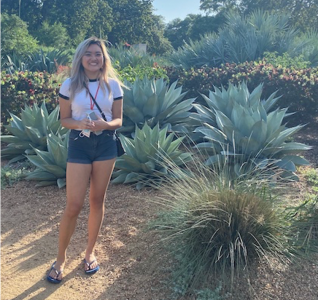 Zhu has been getting to know Houston and here, Hermann Park, beyond the Rice University bubble. (Photo credit: Mohammad Abdel-Aziz)

These days, Zhu doesn’t have a set schedule. She exercises regularly and tries to do more self-care, like yoga and skin treatment masks. She’s reading more often. She just finished “All the Light We Cannot See” by Anthony Doerr and is in the middle of “Inferno” by Dan Brown. Zhu plans on taking summer classes and is also looking at internships. Some of her friends are returning to Houston soon, and she’s excited to have the chance to see them. She’s hopeful for the vaccine that’s being developed, Zhu said. She thinks that the best mindset is to try and remain optimistic. Overall, she’s trying to use the time to take care of herself.

“I’ve tried to be more comfortable being by myself, being isolated, things like that,” Zhu said. “Just doing things that make me feel healthy, make me feel good.”