Glo Harn Choi: Pathways to citizenship for the undocumented can come slowly, and surely, with collective action

When Glo Harn Choi turned 21, he lost his dependent visa to stay in the U.S. No need to enjoy his new status to be able to legally drink. He wasn’t celebrating.

Choi came to the US at the age of four with his family and has spent his whole life here.

Choi’s situation at 21 was unusual. By becoming an adult, Choi could no longer be a dependent, and by losing his visa, he’d become undocumented. As an undocumented person, he couldn’t get a visa of his own.

To be denied a chance to become an American citizen was a disconcerting sentence for the young man who’d spent his whole life in the states. Just like any other rightful citizen, he’d grown up in a neighborhood in a suburb of Chicago.

Choi did not lose hope and looked for other pathways to citizenship. He visited HANA Center, a nonprofit organization for immigrants, seeking legal advice to apply for DACA (Deferred Action for Childhood Arrivals). The answer he heard was that he did not qualify for DACA, because his previous legal status expired too late. He found all his attempts to be futile struggles.

Trapped in-between two different policies, Choi had fallen into the vacuum of the undocumented. “When the world keeps telling you that you’re not going to get what you need, it’s very easy to become very disillusioned by everything,” he recalled. “I thought I should just keep my head down and stay low.” 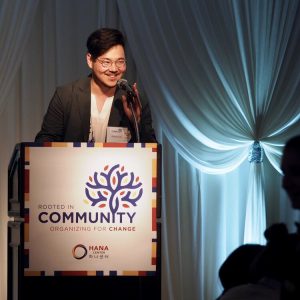 Choi featured on the Hana Center site, telling his story (Click on the photo to hear his story)

Being undocumented is taboo in the Korean immigrant community. Because no one talks about it publicly, Choi thought he was the only undocumented immigrant growing up until he met the community through the HANA Center.

In 1996, Choi’s family moved to the states from South Korea when Choi’s father decided to study at Northwestern University to be a pastor. After arriving, the family found out that Choi’s sister was diagnosed with autism. Concerned with the lack of a support system on the developmental disorder in South Korea at the time, the family decided to stay in the US, hoping for better lives for their children.

They didn’t realize that no matter how hard they worked, there was no straightforward pathway for them to earn citizenship in the US. For over ten years, Choi’s parents worked to change the family’s status. And yet, the promised sponsorships from their employers didn’t come through. In order to maintain legal status to stay in the states, one of Choi’s parents had to stay enrolled in school to keep a student visa. Both parents alternatively went to school. Only the person who was enrolled in school had legal means to work. One person went to school full time and worked full time to make tuition and living expenses for four people in the family. The other person stayed at home to care for one growing boy and one girl with special needs.

Choi said that his world was as limited as a dependent on a visa as when he lost the visa.

“That’s why the immigration system is so broken,” Choi said. The current immigration system allows for no pathway to citizenship for 11 million undocumented people. The only plausible option is through the petition of a family or spouse who has citizenship. “It is like an unreachable dream.”

Being undocumented means the uncertainty of everything. “Most of my life, until two or three years ago, I had zero plans,” Choi said. Choi lost interest in school and worked at restaurants for a living.

Then, something broke his indifference. In 2016, Donald Trump was elected president. Choi recalled that it seemed like the whole world was against us. “Not only the rhetoric from the current federal administration but also … negative viewpoints on immigrants [from the people I know].” He continued, “I just thought I could no longer sit idly by while our communities are just struggling so much.”

With the skill set he had, he started to work voluntarily at HANA Center as a photographer to support the community. The experience in the community made him realize “that everyone has a place in this world.” Being able to be connected with people in the same position liberated Choi. Transitioning from volunteer to a community organizer at HANA Center, Choi said he now he feels responsible to provide the same safe space for people to contribute to.

Yujin Maeng, one of the former coworkers at HANA Center, shared how Choi reached out to the Center to be part of the movement. Choi joined as a core biker for the Journey to Justice: Dreamer 2018. For 37 days before the 2018 midterm elections, a group of young activists biked from Seattle down to San Diego. They stopped by 33 cities to initiate a conversation on what it means to live a life without a citizenship.

Such campaign functions as a leadership ladder allows people in authority to create leaders, Maeng said. One person initiates conversation with another, creating a series of action steps, eventually helping others to be part of the action. “Glo started off as a participant and ended up being an organizer,” Maeng said.

“I was not someone who took action very often,” Choi recalled. “But action requires bravery, and that is the only way to move forward.”

Now working as a community organizer, Choi explained the social services that the HANA Center provides as “mitigating the symptoms of our broken system and … striving towards fixing those systems, so they no longer create the wounds that inflict pain upon our society.”

“People say, ‘let’s make America great again,’” Choi said. “But I think it [what is currently happening] is a regression.

I think at the heart of it, people are saying there’s something wrong and we want to change. But what breaks my heart is that the change is only helping such a small number of people. Not all people.”

Choi sees a society in which one’s privilege is often at the expense of others. Still, everyone has power and privilege, he said. People need to recognize that and do something with it.

“With respect to undocumented communities, being a true ally [would] mean a lot,” Choi said. “Slowly, but surely. People come together, and changes happen.”

Choi argues that collective action is needed to bring change. “It requires a larger understanding of how we’re all connected to one another,” Choi said.

Choi isn’t blindly optimistic. He believes that persistent movement forward will plant seeds for the next generation.

“It is our duty to continue doing that for the people after us,” Choi said. “Even our life now, we get to eat the fruits of the trees people planted before.”