How have Korean Americans prepared for COVID-19?

At the beginning of April, KANU (Koreans Association at Northwestern University) distributed disposable masks to anyone who applied for one. “[At that time], a lot of Koreans were going back to Korea,” said an executive board member, who preferred to not be identified by name.

“There was so much demand, but it was really hard to get masks,” he said. So, we decided to add some remaining budget and use it for a good cause and help out the Koreans remaining at Evanston.” 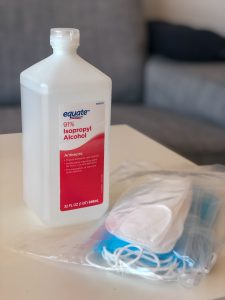 He asked a friend to ship masks from Korea because Korea had been through the pandemic a few months by then and had enough supplies. The friend purchased masks from a mask factory he knew of and shipped them by air.

The recommendations of the Centers for Disease Control (CDC) on face-covering has dramatically changed in the process of the spread of Covid-19. Originally, in March, the CDC stated that it did not recommend that people who are well wear a face mask to protect themselves from respiratory disease, including COVID-19. With this protocol, the US sensed the imminent danger of the virus but was discouraging people from using masks to address it.

Although many people were hesitant to wear masks, the Chinese and Korean communities responded quickly to acquire PPE (Personal Protective Equipment) and wear masks and gloves for protection.

Jin Lee, Business Planning Director for the Albany Park Community Center, explained how Korean Americans could react faster to the crisis than other communities. The Korean American community has the largest number of ethnic media outlets among Asian communities. Chicago alone, has six different newspapers, two radio channels, and two TV news channels in the Korean language. The expansive media attention indicates that the community keeps a close association with issues and events in South Korea.

Because South Korea is located just off the coast of China where the COVID-19 virus originated, it was hit with the spread of the virus early in the year. The first confirmed case in Korea has been documented to go back to  Jan. 20 and after that, the spread was swift and dramatic, peaking on Feb. 29.

Coming across the daily news of increasing confirmed cases from South Korea and hearing stories from relatives in South Korea, Korean Americans could anticipate that it was only a matter of time that the virus would spike in the U.S.

In February, the South Korean government started a policy to distribute two masks a week to everyone through pharmacies, emphasizing the importance of social distancing and wearing masks. It was a cue for Korean Americans to obtain masks before the buying panic hit in the states.

Retail businesses in the Korean American communities also read the slump in the industry and came up with a new game plan. A business owner of a jewelry shop in Chicago, who preferred to not be identified, had switched his sales from jewelry to masks as the pandemic intensified.

“People do not wear jewelry during the pandemic because they are all staying in,” he said. “I was worried about how it will impact not just my business, but employees who are relying on this.”

One of his business partners in China suggested selling masks. “At the beginning of March, I first brought the masks through an airline. Since the shipping cost was too high, it did not give much margin left,” he said. “Now we import the products through marine, which leaves more margin.

“It did not leave us much profit, but I still got to pay all the employees without a layoff,” he added. “I can’t imagine what I would do if I did not start this [mask business].”

Jimin Kim, a graduate student in Atlanta who received a green card a year ago, explained how she prepared for the pandemic. She explained that she still has enough masks and hand sanitizer since she’d been preparing  before the pandemic hit the states.

“Before Amazon was all out of the hand sanitizers and masks, my husband had ordered them little by little,” Kim said. “I also saw an ad from OnDemandKorea, a Korean TV series streaming site, on selling the mask.” Kim recalled that “as it was not possible for an individual to purchase masks at that time, around March, I was still doubtful if the products will arrive.” They arrived in a few days.

Although the Korean American communities were aware of the necessity of wearing the mask, many Koreans were reluctant to use them due to cultural differences and the fear of racism. “Even though I could wear a mask to work or grocery, it was sometimes easier not to wear it and get away from the hard looks from the public,” Kim said.

Yeongkyung Lee, who commutes from Evanston to downtown Chicago for work, explained her difficulty wearing masks on public transportation. “I heard that the notions people have in the states to wear a mask is that ‘you are sick,’” said Lee. “In Korea, it is so common to wear masks to protect yourself because of the fine dust or flu and so on.” Lee was one of the only a few people wearing a mask on the CTA. It disheartened her to hear that some Asians were kicked out of their Uber rides because they were wearing masks.

Junseok Lee, the vice president of OnDemandKorea, explained how the company initiated the mask sales. To help the clients during the pandemic, the company first lowered the subscription price on its service. They soon realized that they weren’t providing direct help to the community, so they produced news videos about COVID-19 in the Korean language, to counter fake news. They also contacted partner manufacturers to import masks and provide them to their users.

“Many of our service users who are in the younger generation could buy the masks by themselves,” Lee said. “However, it is harder for the elder generation to find the means to buy them. That is why we donated mostly to nursing homes and churches.”

The accessibility of masks was easier for the Korean American communities through various donations from Korean American people or organizations. Since April, Korean American Association of Chicago has raised $35,000 in funds to help Chicago’s Korean communities. The funds were used for sharing food baskets and PPE, especially for those who have difficulty accessing medical service if they don’t qualify for government-assisted health benefits.

On May 25, the Korean government also announced its plan to deliver 2.1 million masks to Korean adoptees in the states.

Korean Americans donated masks outside the Korean communities too. Four Korean American organizations and businesses, including the Consulate General of the Republic of Korea in New York, Long Island Conservatory Foundation, Absolute New York, and KAPAC based in LA, have donated 35,000 KN95 masks and other PPEs to New York.

On May 30, Grace and Truth Presbyterian Church in Indian Creek, IL, organized an event to share masks with neighbors. “Right now, masks have become much more accessible compared to a few months ago,” said Pastor Gu.

Gu is concerned that many Americans still find it very unfamiliar to wear masks. “They don’t take the preventative effect of the mask seriously,” he said. “Few people, who visited the church to say thanks, were also just wearing handkerchiefs, not proper masks, and were refusing to get the masks we offered.”

Gu hopes the event will help raise awareness of the necessity of wearing masks.

“Sharing masks was not a big contribution, it was a big encouragement for me to see how our neighbors appreciated,” Gu said. “Now, we are struggling not only the virus but also the tensions between ethnicity. It means it’s even valuable to share with each other in this time within the means we have.”