Chinese-Americans are shedding their cultural reservations

Before going to her first internship last summer, Lily Shan’s parents stressed how important it was for her to do her work well. They advised her to be dedicated to her tasks because they felt excellent work would translate into a successful experience.

However, when Shan reached out to her alumni network, one alumnus said the most important thing to reap from a first internship is a larger social network. Having experienced the business world, Shan’s mentor understood how success often meant knowing and impressing the right people.

The 2018-2019 executive board for Carnegie Mellon University’s American Marketing Association (AMA). Lily Shan, who is Vice President of AMA, stands fourth from the left.

Shan, an undergraduate at Carnegie Mellon University’s Tepper School of Business, was surprised to hear the alumnus’s suggestion. Being raised by two Chinese immigrants, Shan felt the narrative of working hard to achieve success was more familiar than the murky world of networking.

Shan’s parents were hard workers who got rewarded for their efforts, she said, and she believes this has shaped her idea of how to achieve success.

Chinese and Chinese-American students are flooding into the business world, Shan said, and many of them have the “individualistic and competitive” disposition required to succeed.

Asians are typically pegged as the most successful minority in America. A 2018 report on Income and Poverty by the U.S. Census Bureau states that the median income for Asian householders was $81,331, about $13,000 higher than the next highest-earning racial group, white non-Hispanic people.

Shan attributes some of this lack of representation to the general “meek and hardworking” personality that many Asians are disciplined to have. She said that when Asians get promoted, it’s because they’ve exhibited a pattern of quality work over a long period of time, not because they’ve learned how to socialize.

“You see those people in a corporate environment, you know, talking and laughing with all the higher ups and kissing ass with their bosses and stuff like that, but that’s not really the case with a lot of Asians,” Shan said. “But I think it’s becoming more so the case.”

Gordon Quan, the managing partner and co-founder of the immigration law firm, Quan Law Group, PLLC, also believes that Asian culture has contributed to the glass ceiling that holds Asians back.

Part of the reason we don’t see more Asian executives is that Asians are taught to be humble, so they don’t “toot their own horn as much as other people do,” Quan said. It is ingrained in the culture to be more taciturn, and thus many prefer to be behind the scenes rather than front men.

Since self-promotion is not a natural part of many Asians’ personality, they don’t show up in the media as much, either. Quan said he has had several Asian clients who own hundreds of stores, who are powerful and should be considered executives, but who are not featured in Forbes or other prominent business publications because of their lack of visibility.

Quan is active in local politics and has had his own awkward culture-clashing experiences, as he was often times the only Asian at political events. 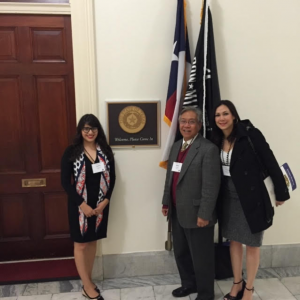 “I would go to some events, and the African American guys are like ‘hey man, how’s it going?’, and worked the room like crazy, and hugging everybody, and I’m like, that’s not me. I can’t do that, you know? I’m an Asian guy,” Quan said.

Quan senses that Asians are becoming less passive over time and that there will be more representation in the C-Suite, as well as in tiers of government. The potential and talent is there, he said.

Quan himself has achieved some political milestones for the Asian American community. He was one of the first Chinese-Americans to serve on the Houston City Council and as Houston’s Mayor Pro Tem. When he ran for city council, he realized that more Chinese-Americans will come out to vote if they see that Chinese-Americans are elected to office.

“We had a lot of Chinese immigrants who came to the polls for the first time, senior citizens in particular, who voted for me because I was the only person they knew,” Quan said. “There were just a bunch of Anglo names [on the ballot] and me, so [the Chinese-Americans] didn’t care about these other people. People came to me afterwards and asked, how did I get Asian-Americans to vote? And I said it’s because they saw somebody they knew, somebody who knew their community and cared about them.”

It’s not easy for Chinese-Americans to reach the level of political success Quan has achieved. Take Alex Lee for example. He’s a candidate for the California state legislature and is currently working as a field representative for California Assemblyman Evan Low. Lee has been in politics for a few years and says there are natural barriers for Chinese-Americans to enter the political world.

“One time I was in Washington, meeting with lobbyists. One of the lobbyists came up to me and asked if I was a high school student,” Lee recalled. “That’s the thing about being Asian in politics. People always underestimate you. Maybe because we have a smaller stature, or we’re not as big, but people just tend to take you for granted.”

Taking Chinese-Americans for granted in politics surfaces in part because they are perceived to not be active on political issues and Asian-Americans more generally have among the lowest voting rates, Still Lee thinks that Chinese-Americans are a very politically engaged demographic, but in a different way than other groups.

“[Chinese-Americans] aren’t super active on every issue,” Lee said. “I’m sure they’ll have opinions and I’m sure they’ll vote, but they’ll only get super riled up about three issues Chinese immigrants live and die on, which are marijuana, affirmative action, and sometimes housing-related things.”

“The Chinese-Americans came out really hard against this policy of affirmative action,” Lee said. “They sent a lot of mail, did a lot of visits and yelled at a lot of people. They literally had buses that sent a bunch of people to go up to the capital to testify in long lines.”

Nonetheless, Lee said there’s definitely plenty of work to do in the Chinese-American community to get more people involved in politics.

“We might as well be more educated about the issues and more active as much as we can in terms of getting people involved,” Lee says. “Other people might not think we care, but if we become more active and more educated, then we’ll prove them wrong.”