For my dad, assimilation is a survival technique and an act of rebellion

“Look at this!” my dad cries, holding out a folder stuffed with documents.

We’re organizing the garage, admittedly not my favorite task as a young teenager. It’s dank and dusty and a little too hot. The bright California sun slants through the open garage door and is likely giving me a t-shirt tan line. My dad, typically too cheerful for the circumstances, is grinning and shoving the folder into my hands.

I flip it open and am immediately transported to another time. It’s a few minutes after midnight on the first day of 1976. My dad has just arrived at Los Angeles International Airport from his home in the Philippines. If his facial expression is anything like the one in his old passport photo, he’s wary, serious, a little scared, and entirely unlike the bubbly man I know as my father.

To immigrate to an unfamiliar country at any age is a challenge; to immigrate as a six-year-old and move in with a birth mother and stepfather you’ve never met sounds daunting. Yet my dad did just that, and thrived. He got into the honors program in middle school and was bussed to a wealthy school district for years; made friends with the Hispanic and Black kids in his neighborhood; skateboarded, surfed, and made it onto the football and wrestling teams, despite being, as he puts it, “five feet, four and three-quarters” inches tall. When he was 18, he enlisted in the Marines and served for four years. He was, in essence, the perfect American citizen…and yet he wasn’t a citizen. It wasn’t until 1996, when he was 26 years old and married, that my dad was naturalized. 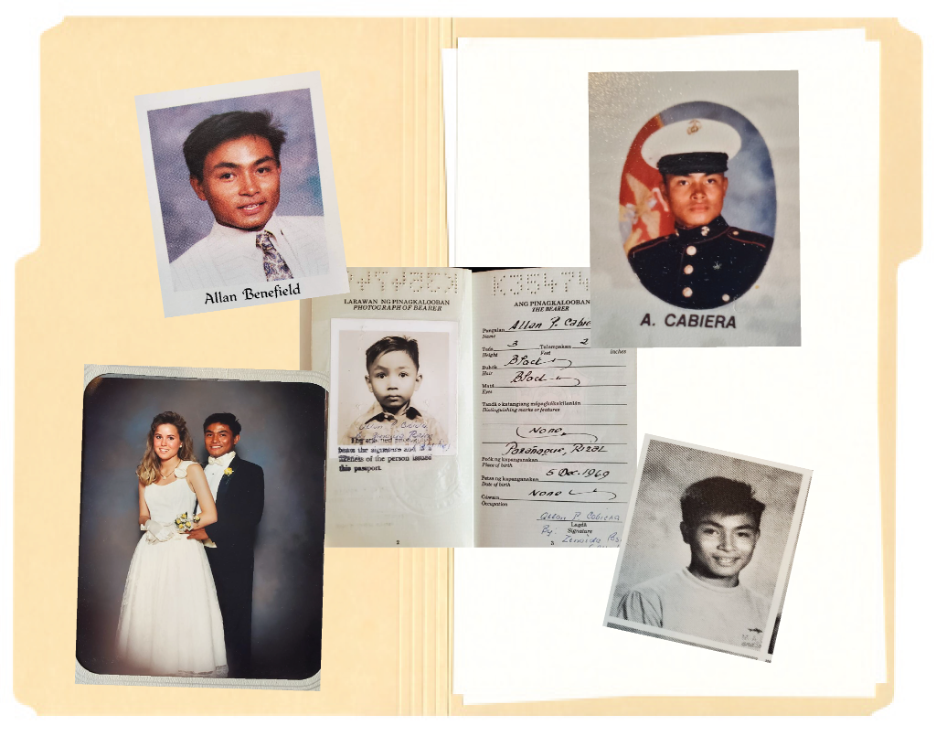 My dad’s childhood passport and photos of him in high school and in the military. He immigrated to the U.S. on Jan. 1, shortly after his sixth birthday.

Growing up, none of this mattered to me. My dad was an American citizen, just like everyone else’s dads. He spoke English, had an office job, and cared way too much about baseball to be anything but American. I was thankful that he, unlike my grandmother, didn’t have an accent. He didn’t even speak Tagalog, having long since forgotten his native language from lack of use. We ate hot dogs and chocolate cake, not pinakbet and turon.

And yet I was different, and I knew it. When I went to the grocery store or the park with my blond, blue-eyed mother, strangers would approach us and ask if my siblings and I, tan and dark-haired, were adopted. I became accustomed to the question that every ethnically ambiguous person is familiar with: “So… what are you?” The query came up so often that I began to wonder myself.

Despite my genetics, I didn’t feel that I could identify as Filipino, as my childhood had contained little trace of the cultural elements of my father’s home country. I didn’t feel white, either. My dark features made sure of that. I was frustrated by my lack of a definite answer, and I channelled my anger toward my father. What kind of self-respecting Filipino could forget Tagalog? I thought.

It was only when I was older that I could recognize that my struggle to racially identify myself had less to do with my dad’s assimilation and more to do with the narrow and exclusionary racial categories that I was told I needed to box myself into. I straddle the blank space between “Asian” and “White” on forms. Sure, I could check “Two or More Races” but that feels even more vague.

In a way, my dad found a way to break free from the sharply delineated boundaries by doing the unexpected, whether he was getting straight As in an honors program or enlisting in the military of a nation that would not yet accept him as one of its own. Assimilation was simultaneously a survival technique and an act of rebellion, a way to fight back against the racial stereotypes that follow my dad wherever he goes.

And yet there is a part of him, and thus a part of me, that got lost along the way. I can see it when he looks at a passport in a language long since lost to him, and I can feel it when I am surrounded by a group of Filipinos talking about trips to a country that is inextricably tied to me and yet feels so foreign. There is a kind of tragedy in assimilation, and the grieving process extends through the generations. I am still mourning the loss of a nation I have never seen.

Note: In mid-April 2021, the Biden administration ordered U.S. immigration enforcement agencies to stop using the term “assimilation,” and to use the word “integration” instead, according to the Washington Post.