Soft drops of rain hit the car window in a rhythmic pattern as I sit in the backseat of a taxi, en route to the airport to return home from college for Thanksgiving. The driver, Ayham, and I begin filling the silence of the dreary November afternoon with polite small talk that quickly becomes a meaningful interaction.

He had immigrated to the United States from Jordan, and life had changed many times since.

Ayham and I were both new to the Chicago area. He’d lived in Boston a few years and a marriage ago. He tells me he moved to Chicago simply because it appealed to him. “Seemed like as good a place as any to start over,” he says.

I, too, found new beginnings in the city skyline: college, a career, new friends far from the rural roads of small town Ohio. 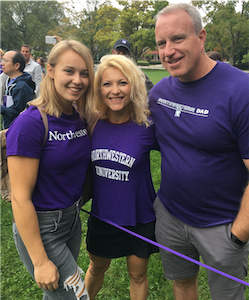 Hearing his story, I kept thinking about the brief moment of panic I had when I first arrived at Northwestern and watched my parents drive away from my dorm. Suddenly I was living with strangers, in a strange place, with no one connected to my old life anywhere in sight – and I was only a few hours away from home.

I imagine Ayham, speaking only a few common English phrases, arriving to the United States – alone and inundated with change – and know that that was a fear and courage I couldn’t even conceptualize.

Ayham asks me what I’m studying at Northwestern. I tell him how excited I am by the prospect of journalism, and how interactions like the very one we were having make me yearn to tell other people’s stories. “You’re very passionate,” he observes. “That’s important.”

“What makes you feel that way?” I ask. Ayham tells me that in addition to driving for a taxi company, he’s worked in various restaurants in the city and has fallen in love with the food industry. His ultimate dream, he says, is to own a restaurant one day and be a caring employer to other immigrants.

In his family and community in Jordan, Ayham explains, his passion for food wouldn’t be understood. His two other siblings were in STEM fields – medicine and engineering – and higher education. Well-paid jobs were valued over all else. Ayham tells me he often struggles to feel adequate because he’s pursuing a different career path. He’d been to college, and it just didn’t quite suit him.

As a first generation college student, all of the respected and loved adults in my life had made lives and careers for themselves without a degree, and though it was often a struggle, many of them were successful and passionate about their work. I tell Ayham that, and he shoots me a smile in the rearview mirror. 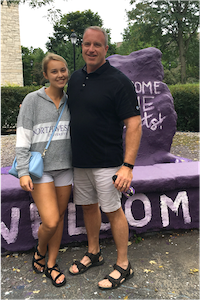 What I don’t share, but persists in my mind, is the nagging wonder if I’ll ever feel successful enough at Northwestern. I had 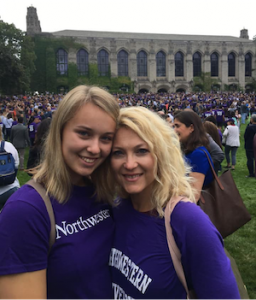 applied mostly on a whim, considering Medill to be a remote possibility rather than a real option for me. Once on campus, seeing the experiences and accomplishments of my peers makes me question almost daily my place at the school. Without knowing it, Ayham has made me feel a little less alone.

I sit in quiet and thoughtful admiration for the rest of the car ride, considering Ayham’s resilience and courage. I find pursuing my passions quite terrifying at times despite the support of my family and friends, and the knowledge that they could be here in a few short hours with one phone call. I wonder if there are others out there, with a vast multitude of immigrant stories, who share his strength.

As the car slows to a stop at the terminal, Ayham turns, holds a warm look for a moment, and wishes me luck in the future. “Go be great,” he says. I have a feeling he will be, too.