No me olvides: A father’s journey to the US

Migrants slowly file out of the comedor as I collect empty bowls of salsa, half-full glasses of tea and red to rtilla baskets. I say adios to the mix of cheerful smiles and tired eyes who ate beneath the mural reimagining da Vinci’s The Last Supper with migrants instead of disciples. They exit the Kino Border Initiative (KBI) into Nogales, Sonora, Mexico and head northward to America, or return home after their removal from the US. 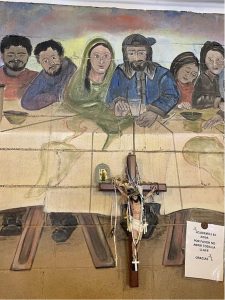 The mural on the back wall of the Kino Border Initiative’s comedor, which reimagines the The Last Supper with migrants. (Photo credit: Wikimedia Commons)

At a large metal sink in the corner stands Denis, a migrant up to his elbows in soapy water. He has short black hair with a tight beard and bright smile, and wears heavy, dark clothes in the early August heat. His rolled-up sleeves reveal the tattoo of his name on his forearm.

I join him at the sink to help wash dishes. My Spanish skills allow for conversations. The native Honduran doesn’t know English well. He tells me he has no prejudices and we’re all human beings with the same blood. I ask about the tattoo, and he jokingly tells me it was penned there para que no me olvide — so I don’t forget it.

Denis pulls a folded sheet of loose leaf paper from his jacket pocket. He shows me the hand-written letter in phonetic Spanish from one of his three daughters. The note closes with no me olvides — don’t forget me. Denis beams with pride. I want her to see how happy her letter makes him. There’s no way he will forget her.

Denis says he’s getting to the US pasito a pasito — step by step. He plans to cross at night during a storm to avoid detection by one of the 60,000 U.S. Customs and Border Protection agents that make up one of the world’s largest law enforcement organizations.

A hard rain comes that night, and I wonder if Denis is out in the storm. The Arizona border is notorious for migrant deaths in the scorching heat. The cooler temperatures in the rain may increase his chance of survival. At the same time, many migrants die from the treacherous terrain alone, and low visibility at night can be dangerous. Hiding from the border patrol and navigating barbed wire fences will also be challenging in the dark. He’s risking his life traveling through the desert for his daughter’s future.

In writing this piece, I reread my journal from my visit to KBI. I’d scribbled of singing “Despacito” with Denis and of time washing dishes together. When recounting the letter from his daughter, I had written, “Imagine your dad forgetting you being a serious concern.”

Denis seemed haunted by the fear of forgetting. It was burned into his arm. It was in his daughter’s letter that he clung to. He passed it onto me in my scribbled journal.

I remember him and his story three years later. I think of his family often. As he’d asked of me when we parted, I still search Facebook for his profile. No me olvides.