What the cemetery has to say

My mother, my grandmother and I mindlessly walk a winding path toward my grandfather’s headstone. I watch as my mother lays down a bouquet of flowers. My Nana ignites a piece of charcoal in a small, cross-adorned and slightly tarnished incense holder to light some bisma, small pieces of fragrant frankincense.

A Father’s Day visit, like this one during the pandemic, to Chicago’s Montrose Cemetery marks a tradition — albeit a somber one — for my mother and hers. 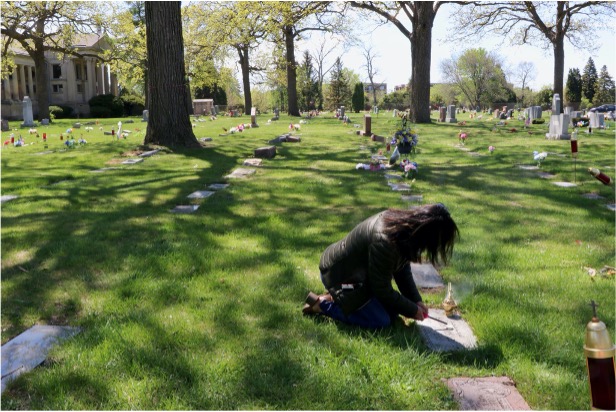 My mother kneels at her father’s grave at Montrose Cemetery. Much of the section of the cemetery is a burial ground for Assyrians who lived in Chicago. (Photo credit: Yasmeen Altaji)

My mother, her seven siblings, and their parents immigrated to the United States from Baghdad in 1974. Fragments of the Assyrian neighborhood that had grown steadily along the “two rivers” back home had uprooted and reconvened in Chicago’s West Rogers Park. Multi-generational families took to navigating their way around the CTA on snowy, icy roads instead of along their fruit-strewn backyards on sunny days in Iraq. Assyrian American cultural associations, churches, grocery stores and social clubs bloomed from Chicago’s weathered foundation.

I look up from my grandfather’s soil-dusted headstone and turn my attention to a grandiose, black stone monument a few meters away. Etched at its very top, the words “Assyrian, Armenian and Pontic Greek Genocide of 1915” beckon a sobering glance at the list of names of Assyrian-populated towns ravaged by Ottoman forces at that time. Beside it, two sculptures of the Lamassu, an ancient archaeological icon, flank a pillar bearing the name of this “Assyrian memorial park,” seemingly guarding a stone pavilion where a late Patriarch of the Assyrian Church of the East is buried.

Soft sobs interrupt delicate whispers of the Assyrian language as mourners engage in single-voiced conversations with their departed. Family members, friends and strangers offer each other words of comfort. Assyrian names and icons stretch across this corner of the neighborhood cemetery, providing eternal shelter to the Sarkises and Sargons, Yonans and Youmarans who came from Iraq, Syria or Turkey, perhaps, across decades and seas. Their sisters, brothers, grandchildren and widows trickle in and out of the property, paying respects and sharing silent sorrows.

Left: a man pays his respects at the shrine of Mar Dinkha IV, the late patriarch of the Assyrian Church of the East. Right: The face of a Lamassu sculpture (Photo credits: Yasmeen Altaji)

Lying here are those whose loved ones buried them in the city that became their home, rather than near the Tigris and Euphrates or rolling hills of what many of them call their true homelands. Those who had no choice. The ones who died peacefully or not, maybe like my grandfather did, in a car crash in northern Illinois more than twenty years after successfully ushering his family from the threats of Iraq to the promise of safe haven that was Chicago.

Chicago is home to one of the largest Assyrian communities in the United States and, many say, in the world, outside of the Middle East. Community leaders estimate that 100,000 Assyrians live in Illinois alone, contrary to the country’s total 100,000 that a 2018 American Community Survey estimated.

A walk through the de-facto Assyrian section of Montrose Cemetery serves as a peaceful reminder of the struggles the community has faced in the United States and back home, from poverty to persecution. But it’s also a check on reality, a mile-marker for how far the community has come — from factory workers and business owners to store clerks and local officials.

The cemetery is a reminder of a not-so-distant past that I, like many of my generational companions, have never experienced but have difficulty forgetting. It’s a reminder that manifests itself in the light in the newly immigrated grocery store owner’s eyes when I greet him in our ancient language and in the khigga music I play in my car at full volume to the obvious dismay of drivers next to me.

It’s a reminder of a parallel present, thousands of miles away, lived by Assyrians determined to stay in their homelands. Their stories ring from their homes to the diaspora, the pulse of a community abroad. I tell some of these stories in the podcast I created, The Word (a play on the translation of the colloquial Assyrian greeting “Mut khabreh?” — literally, “What’s the word?”). The platform provides weekly Assyrian news updates from across the globe. One episode covers tumult in the Barwar region of Iraq’s mountainous north, where Assyrians civilians are caught in Turkish and Kurdish crossfire. Another highlights the Iraqi Kurdistan Region, where locals in Alqosh navigate delicate political webs to end municipal land grabs that threaten their long-term security. Across the Nineveh Plains, a project spearheaded by an Assyrian-run non-profit in collaboration with USAID brings solar energy to rural areas ravaged by ISIS. 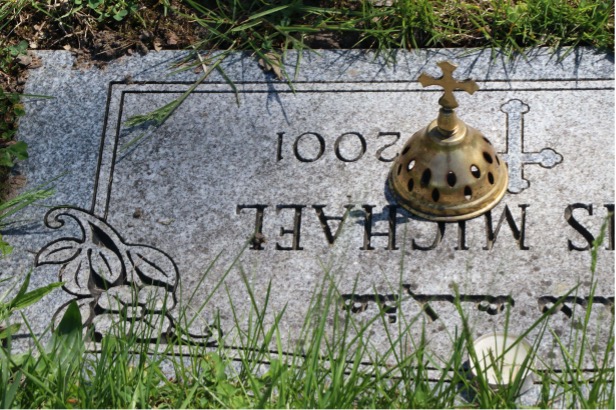 The cap of an incense holder sits on a headstone (Photo credit: Yasmeen Altaji)

At the age of seventeen, I made a whim-driven decision to send my writing samples to the editor of a newborn Assyrian news outlet. Two years later, I was managing its rapid growth with my co-editor. Now, I spend every week knee-deep in an Assyrian news cycle that floats to a beckoning surface thanks to journalists and community members who uplift the stories when oppressors work to push them down.

I lift my head and take another look at my grandfather’s headstone and the others that dot the weepy green lawn — the quiet backbone of an Assyrian community in diaspora, but very much alive.