The Drs. Ahmad heal through cohesion and unity

Sitting closely and smiling warmly in their home, Dr. Afzal Ahmad and Dr. Shireen Ahmad tell the story of a life built together while establishing individual careers. Afzal Ahmad proudly looks at his wife as she tells me about her career.
“Don’t let her be too modest,” he says through a wide grin. 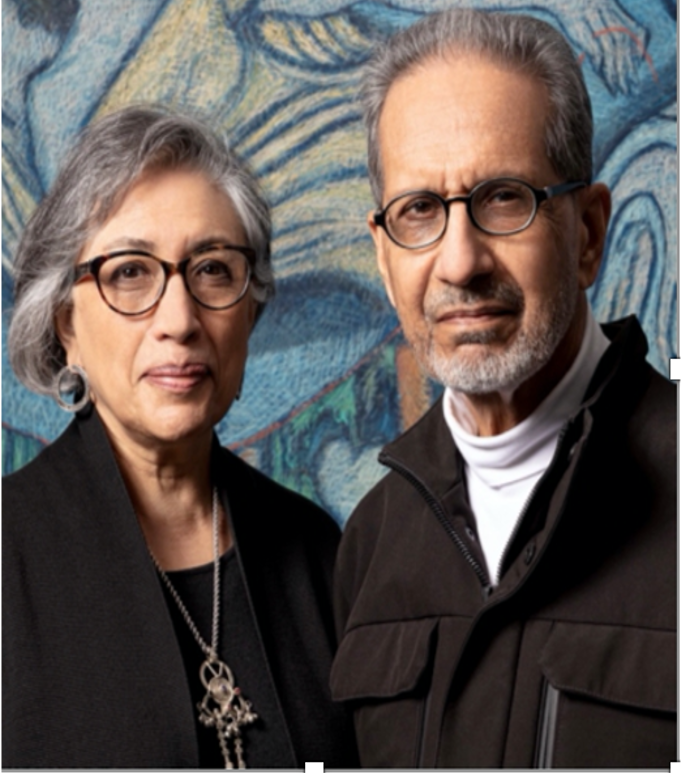 Afzal and Shireen Ahmad have made breaking barriers a habit; Afzal as an ophthalmologist known for serving low-income families, and Shireen as professor of Anesthesiology at Northwestern University’s Feinberg School of Medicine. The Ahmads have dedicated their lives to uniting South Asian communities through nonprofit organizations in religion, education, the arts, and protecting vulnerable and abused women. They’ve been at it in Chicago for 50 years.
Funding is often a barrier for nonprofit organizations. Shireen saw a need for a domestic abuse shelter for South Asian women while working at Feinberg. It inspired her and Afzal to reach out to the founders of Hamdard Center, which was struggling to open. The Ahmads funded the first year of the organization, and the center has greatly expanded its reach since then, now serving patients at multiple locations.
Afzal and Shireen constantly look ahead to their next project, believing that the success of community organizations lies in young, active leadership. “Once we get the organization going, we don’t stick around too long,” Afzal said. “I think it’s better to hand it to people who have more energy, who bring new ideas to the situation.”

The Ahmads were instrumental in the founding of the American-Islamic Association (AIA) in Frankfort, Illinois, despite pushback by the surrounding community. “That was right after 9/11, which was a very hard time for Muslims in the United States,” Afzal said. “People were afraid to stick their neck out.” 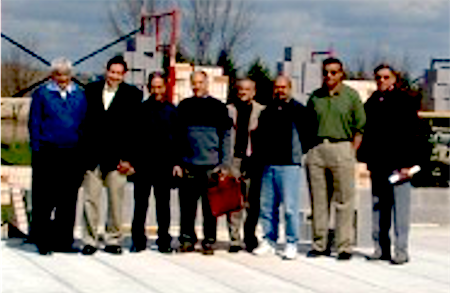 Dr. Afzal Ahmad (3rd from left) and other board members at the groundbreaking of the American Islamic Association.

According to FBI data, hate crimes against Muslims in the United States increased dramatically in the year 2001 (from 28 in 2000 to 481 in 2001), and persisted at rates much higher than pre 9/11 years for the following decade. Further, a 2003 Pew Research Center poll found that 2 years after 9/11 a growing number of Americans linked Islam to violence.
With the support of then Frankfort mayor Jim Holland, the Ahmads and others involved eventually brought the mosque to fruition, forming an inclusive Muslim community that prides itself on its commitment to women in leadership roles.
“I spoke at the mosque several times,” Holland said. “[I said] ‘we will do everything we can to make sure that there are no problems here in Frankfurt, because you all are good neighbors.’”
Khalid Mozaffar, Associate Principal of the AIA Weekend Islamic School and founder of the South West Interfaith Team (SWIFT), which collaborates with nearby churches and synagogues, explained that Afzal Ahmad emphasized the association’s commitment to inclusion from the beginning.
At the first interfaith event AIA hosted in 2003, Shireen Ahmad spoke about her connection to religion. Afzal insisted that she also speak about her career.
“He knew the opinion of [many] people of Muslim women [is] that they’re very oppressed,” Mozaffar said.
Especially in the aftermath of 9/11 and the harmful stereotypes of Muslims that persisted, it was important to Afzal that the AIA represent the Muslim community fairly.
Mozaffar extolled Afzal Ahmad’s caring leadership style, and explained that Afzal helped him gain the confidence needed to run an organization.
“It was through his trust in me that I learned to trust myself,” Mozaffar said.
The Ahmads’ current project, South Asia Institute, was born out of a passion they nurtured while in Pakistan. The Ahmads traveled to Pakistan annually for many years so that Afzal, working with the Layton Rahmatullah Benevolent Trust could perform cataract surgeries. Cataract surgeries, Afzal said, are a crucial procedure that, when needed by a head of household, can be vital to the livelihood of an entire family.
On the trips, Afzal and Shireen collected Pakistani art. Over the years, the collection grew. They noticed a profound exclusion of South Asian art among mainstream institutions, and decided that to honor South Asian visual art, they would have to establish their own institute.

Shireen and Afzal have made cohesion and unity of South Asian communities central to their efforts.
“One of the things that we would like to see is that people from [South Asia] in this country, in particular, try and heal some of the wounds that exist,” Shireen said. “Some of them are pretty deep.”
Shireen explained that many of the divides between South Asians are rooted in the physical dividing of nations that has occurred over time, including the violent partition of India, and eastern Pakistan becoming Bangladesh.
The Ahmads view art as a unifying medium, and work to emphasize the collective similarity of Indian, Pakistani, Bangladeshi, Sri Lankan, and Nepali communities rather than exacerbate differences or hold grudges based on historical, cultural, or religious disagreement.
“We think through the arts, we might be able to have dialogue,” Shireen said.
The South Asia Institute will be open to visit by appointment this summer. The next exhibition, The Sindhu Project: Enigma of Roots, runs from June 10 – August 15.
###