She recalls “texting or emailing people here being like, ‘The pastor kept his mask on when he was preaching, and I kept a mask on because I did a solo when I was singing, and it was so strange,’” Chan McKibben recounts.

Chan McKibben had come from Chicago for her father’s funeral, and she witnessed firsthand the unfolding COVID-19 pandemic that her friends and family in Chicago were yet to experience.

Chan McKibben had been back to Hong Kong a few times since moving to the United States at age 16 for boarding school. While in school, Chan McKibben kept in touch with family by placing collect calls or writing postcards. She said that being far away felt like a new adventure at first, but her father’s passing last year caused her to reflect on the distance.

“At 16 it just sounded like a fabulous idea to put almost 10,000 miles between yourself and your parents… and then you kind of spend the rest of your life trying to get closer,” said Chan McKibben. “I’ve created a new life with a career and family and everything here. In the back of your mind you always knew that your parents aren’t going to live forever, but it’s very different at 16 to know that.” 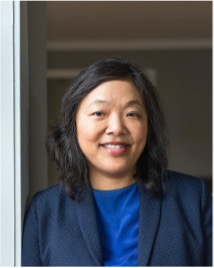 The new life that Chan McKibben created in the United States would lead her to a successful career in the private sector, decades of nonprofit and service work, and a run for office. These experiences built the foundation for her leadership role in the Chicago Chinese American community, she explained.

“It took me until I was after 40 to feel like I’ve learned a lot and had a great career in the mainstream,” said Chan McKibben. “Then I can bring back to the Chinese American community and kind of contribute and also help bridge the two communities together– the mainstream and the ethnic.”

In her current position as Executive Director of the Coalition for a Better Chinese American Community (CBCAC), Chan McKibben spearheads initiatives that work to strengthen the Chicago Chinese American community through voting, policy advocacy, organizing, and more.

“We’ve done a lot of civic engagement in the sense of getting out the vote, and most recently, getting out the census,” said Eva Nip, Lead Organizer at CBCAC. “It’s been a lot of work… decreasing language and technology barriers especially related to voter suppression.”

“Service is very important because I think for a lot of immigrants, getting jobs or getting childcare or getting care for the elderly, all of those are really important,” said Chan McKibben. “But then in order to advance the entire community we need to also think about policy and systemic changes that would make things more equitable and more inclusive.”

Chan McKibben said the needs facing her community have compelled her to do more. In 2018, she ran for the Illinois House of Representatives in the 25th district. Although her bid was unsuccessful, she said she wants to see more immigrants continue to seek office.

“It’s very important to encourage more immigrants and more different kinds of voices to be represented in the legislature,” said Chan McKibben. “Traditionally, legislative bodies are very white, very male, and I think that the more diverse voices we can have, the more different perspectives can definitely help everyone.”

Chan McKibben is part of a growing movement of immigrants seeking political representation.

Aamina Ahmed from New American Leaders, a nonprofit that supports first- and second-generation Americans running for office, said that the barriers to entry in politics lead to underrepresentation in immigrant communities.

“When an Asian American gets up to run in a district that is Asian American, people are like, ‘why are you running?’ Whereas no one ever asks the white person that,” said Ahmed, who serves as a Program Manager with New American Leaders. “Anytime you do get representation, it makes a big difference, because now all of a sudden you have a whole generation that sees that role as a possibility for themselves.”

Chan McKibben said that ultimately, her background as an immigrant fuels her to participate in the civic process.

“Because I grew up in Hong Kong, in a place where there wasn’t a system of democratic vote, I don’t take lightly the fact that American citizens are able to vote and able to participate in civic and electoral politics in a more direct way,” Chan McKibben said. “I would definitely encourage folks to not take this for granted.”