For this Assyrian immigrant, one safe haven lies beyond the checkout counter

A smiley young man is working behind the register, tending to miscellaneous knick-knacks and a mid-afternoon influx of customers, his pandemic-precautionary mask almost covering his dark beard. 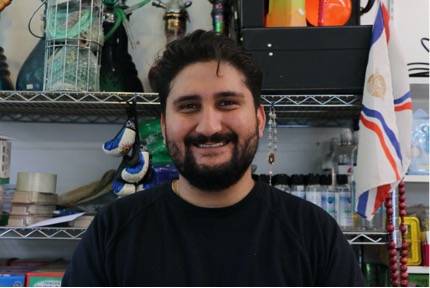 Patrons amble through aisles stocked with spices and past self-service containers filled with dried vegetables, nuts and seeds. They’ve come into Nohadra Grocery, not in the small town in Iraq (also called Duhok) for which it’s named, but on the corner of Devon and Sacramento in the Chicago neighborhood of West Rogers Park. The script bearing its name above its front door serves as a beacon of familiarity to Assyrians who pass it. 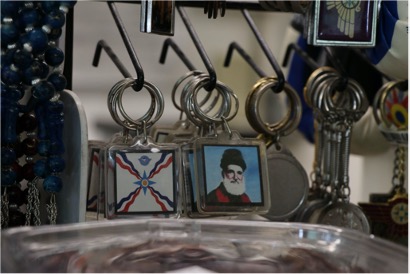 Keychains depicting the Assyrian flag and an Assyrian Church of the East Patriarch hang for sale at Nohadra Grocery’s checkout counter.

A cooler in the back chills a few pints of ice cream and half-gallons of doweh, a yogurt-based drink that’s an intercultural staple across Middle Eastern households. In the storefront window, a calligraphic Quranic verse hangs on display, and a shelf behind the checkout counter holds holy-water-filled plastic bottles in the shape of the Virgin Mary.

“We had the exact same kind of store back home,” Kakony said, “but it was a little bit bigger.”

Back home was Ankawa, Iraq.

The invasion of the so-called Islamic State in northern Iraq — the native home of dense populations of indigenous Assyrians — meant the sudden need for a safe haven anywhere outside of the homeland.

For Kakony, that haven transformed into his family’s specialty grocery store, a small establishment offering fresh baked goods and imported items that the family bought six years after arriving in the U.S.

Kakony fled his home seven years ago after ISIS gained control of the region. In 2014, ISIS occupation threatened Assyrians living on lands their ancestors had inhabited for thousands of years, launching genocidal campaigns targeting indigenous ethnic minorities — including Assyrians — across Iraq and the Levant.

The consequent threats to safety drove many Assyrian Christian families, including Kakony’s, out of Iraq.

Originally from the town of Shaqlawa — another densely Assyrian town in northern Iraq — Kakony’s journey took him from Ankawa to Amman, then Fuheis, Jordan in 2014 until in 2015 it brought him to Chicago, where he is now a student at Northeastern Illinois University.

Dried goods line an aisle toward the back of the store. Items like these are popular in MIddle Eastern grocery stores and are sold by weight.

When ISIS attacked his family’s area, militants were just half an hour away, Kakony says. “It’s what really motivated us to leave.”

Today, Kozet Marbin, Kakony’s younger sister, is working the register. Only 16 years old when her family left Iraq, she recalls the days of her childhood in Ankawa, surrounded by a tight-knit Assyrian community when ISIS as an entity wasn’t in existence, let alone a looming threat.

“It [was] a very close [Assyrian] community; everyone knows each other,” she says. “In school, church…everywhere you’d go, there would be people that you know, that you grew up with.”

Marbin remembers her town as a safe place, unbothered by threats of rogue military occupation.”But when ISIS came and they were a couple of miles away from us, they were threatening everyone.”

ISIS’ targeting of Christians in Iraq and the Levant put Kakony and his Assyrian-Chaldean family at risk. His father, Nabaz Sabo, suffered an injury when shrapnel from a nearby explosion hit his leg.

“I was outside and my phone was dead when an explosion [happened] a little bit far from my house,” Kakony said. “So my family heard it, and they left the house to check on me. On [my father’s] way back, another one exploded.” 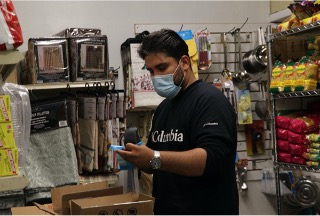 Kakony marks prices on items in a new shipment. When he’s not tending to customers, Kakony sits at the back of the store, tuned into online lectures. He anticipates completing his undergraduate degree in December.

“The kids have a future here,” Sabo said, comparing the present to their situation back home. But the future he envisions for them is one that takes place beyond Nohadra Grocery’s doors.

“I’m not giving [the store] to my children,” Sabo said. “They’ll do other things. They have a future here,” he said again.

Kakony envisions a future where his college degree is a foundation for his own business. He wants to expand his ecommerce store, where he sells jewelry and other wearable knick-knacks.

“I mean, you’re always gonna miss your home, wherever you live,” Kakony said. “You can never compare where you were born and where you were raised to anywhere else.”