Religion complicates the destiny of this Iraqi refugee 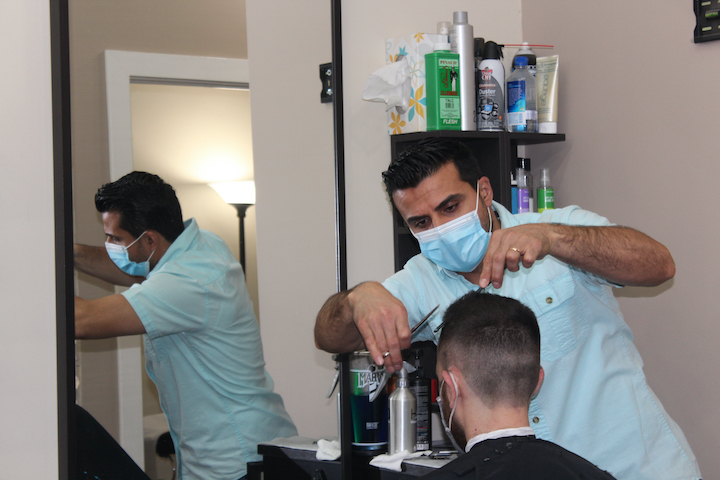 Ashor Younan first learned how to cut hair when he was in his teens, watching the stylists in his father’s Chicago salon.

Ashor Younan, an Iraqi refugee, was hard at work at Scissor’s Palace, his salon in Evanston, when a new customer walked in. As Younan cut the man’s hair, he treated him like any other client, engaging in friendly small talk. The customer was pleased with his experience, and promised to refer his friends. As it turned out, the man was a Northwestern football player, and soon Younan’s salon was filled with other players and coaches. Their patronage is a testament to Younan’s skill and work ethic, developed over his long journey and transition to the U.S.

For Younan, as for any other refugee, traveling to the U.S. was not a one-step process. At the age of 12, Younan, along with his father, left Iraq for Jordan. The decision, according to Younan and his wife, Ashorina Abraham, rested on his dad’s shoulders. After serving in the military for over a decade, Younan’s father didn’t want his son to face the same fate.

“He didn’t want to take the chance of losing his only son,” Abraham says. “‘Do we leave Iraq and flee a war-torn country?… Or do I send my son off to war? I don’t know if he’s going to make it back dead or alive.’”

After fleeing Iraq, Younan and his dad lived in Jordan for over three years. Because they weren’t legally allowed to be in the country, the teenager couldn’t go to school, and his father couldn’t work legally. But both found ways to earn money. Younan sold coffee in the streets.

When his dad got caught working illegally, the two were deported to Yemen, where they stayed for six months, rarely leaving their lodgings, as they were Christians in a country that is 99% Muslim.

After Yemen, Younan and his father made their way to Younan’s aunt’s home in Greece, by way of Jordan, Bulgaria, and Kosovo. They stayed in Greece for nearly two years, during which Younan worked to save up money for their eventual travel elsewhere. Younan’s grandmother filed their applications for refugee status in three countries: Australia, Canada, and America.

“We got lucky,” Younan says.

He, his father, and his grandmother arrived in Chicago, where another aunt already lived, on June 29, 1998. Younan frequented his father’s salon, where he learned how to cut hair.

“Six, seven months, just watching them, I learned everything,” he says. “Then I took a chance from there, started cutting hair. Since then, ‘til now, I never stopped.”

Younan worked at his father’s Chicago salon starting in the early 2000s, but, in 2015, he saw the Evanston property and decided that he wanted to open up a salon of his own. But in order to start operating this business, he would need to invest all of his savings. Abraham was concerned about the decision, especially since they were about to get married. 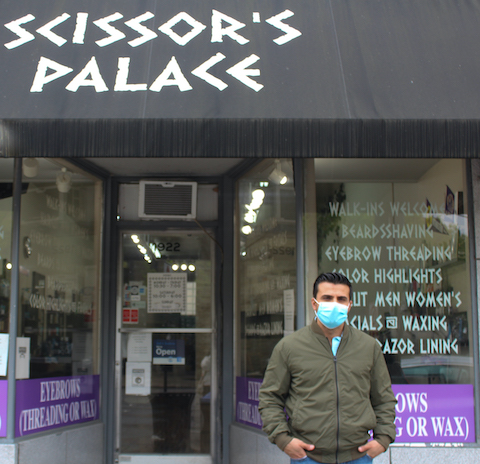 Ashor Younan stands outside of Scissor’s Palace, the salon at 1922 Central St. in Evanston that he opened in 2015.

“He showed it to me, and I was like, ‘Another salon? Can we just stick to your dad’s? … We need stability here,’” she recalls. “He just had a good feeling about it… and of course, I supported him.”

Younan poured his time and energy into the new salon, doing many of the renovations to the location himself. He knew he was taking a big risk, but he was confident in his ability to cut hair.

The work ethic that Younan had developed in his early years selling coffee in Jordan helped him build the salon from the ground up. For three years after opening Scissor’s Palace, Younan worked seven days a week, determined to turn his risky venture into a success. His dedicated employees were a big part of that journey. Younan doesn’t like to act like a boss, although he does try to lead by example.

“I try to be a good leader by them being next to me, not ahead of me, not behind me… I’ll take you places, just stick with me,” he says. “I always encourage them, just keep going… hard work has to pay.”

Larissa Abraham, a stylist at Scissor’s Palace and Younan’s sister-in-law, says that Younan has created a positive environment for everyone in the salon that customers can sense as soon as they walk in the door.

“There’s a great balance between leadership and a friend,” she says. “He has a great energy… a great outlook on life. And I think that makes it that much more enjoyable to work with people like that.”