How will the 2020 census and redistricting affect Chinese American communities?

As Lunar New Year 2020 approached, Christine Chen felt optimistic about the census. As the Executive Director of APIAVote, she had been part of a strategic planning process that involved using community events to educate Asian Americans about the census process and encourage hard-to-reach individuals to participate. All of that changed when in-person events were abruptly cancelled due to the COVID-19 pandemic.

“I felt pretty confident on January 1. We started out strong, and then obviously with the pandemic, it really tossed a curveball,” said Chen. “A lot of our census work and our primary work was right around that Lunar New Year time period. That was our major time period where we’re kicking everything off, and that’s where a lot of the community is usually together, that’s when we really engage and educate them. And that was all gone, so it was really about shifting to online and digital.”

The pandemic was an unforeseen factor that compounded many of the difficulties that already existed in the census process, organizers say. Many were fearful that it would depress response rates and cause undercounts. In addition to the pandemic, another unforeseen factor that many worried about was the citizenship question that the Trump administration attempted to implement into the questionnaire.

“We fought to make sure that [the question] was not included… there was definitely a lot of letter writing, a lot of petitions,” said Mabel Menard, President of Chicago’s chapter of the Organization of Chinese Americans (OCA). “That question was looming over everyone’s heads and people were concerned. It felt threatening to people.”

Although the citizenship question ultimately didn’t make it onto the 2020 census, organizers say the damage was done. The threat of the question represents only one development in a census process that to many, feels inaccessible and exclusionary towards immigrants. As a result of this, many immigrant groups are undercounted and lose access to resources and political representation.

Pre-census data gathered by AAPIData helps to illuminate the concerns and preconceived notions that Chinese Americans specifically and AAPI groups generally had about the census. 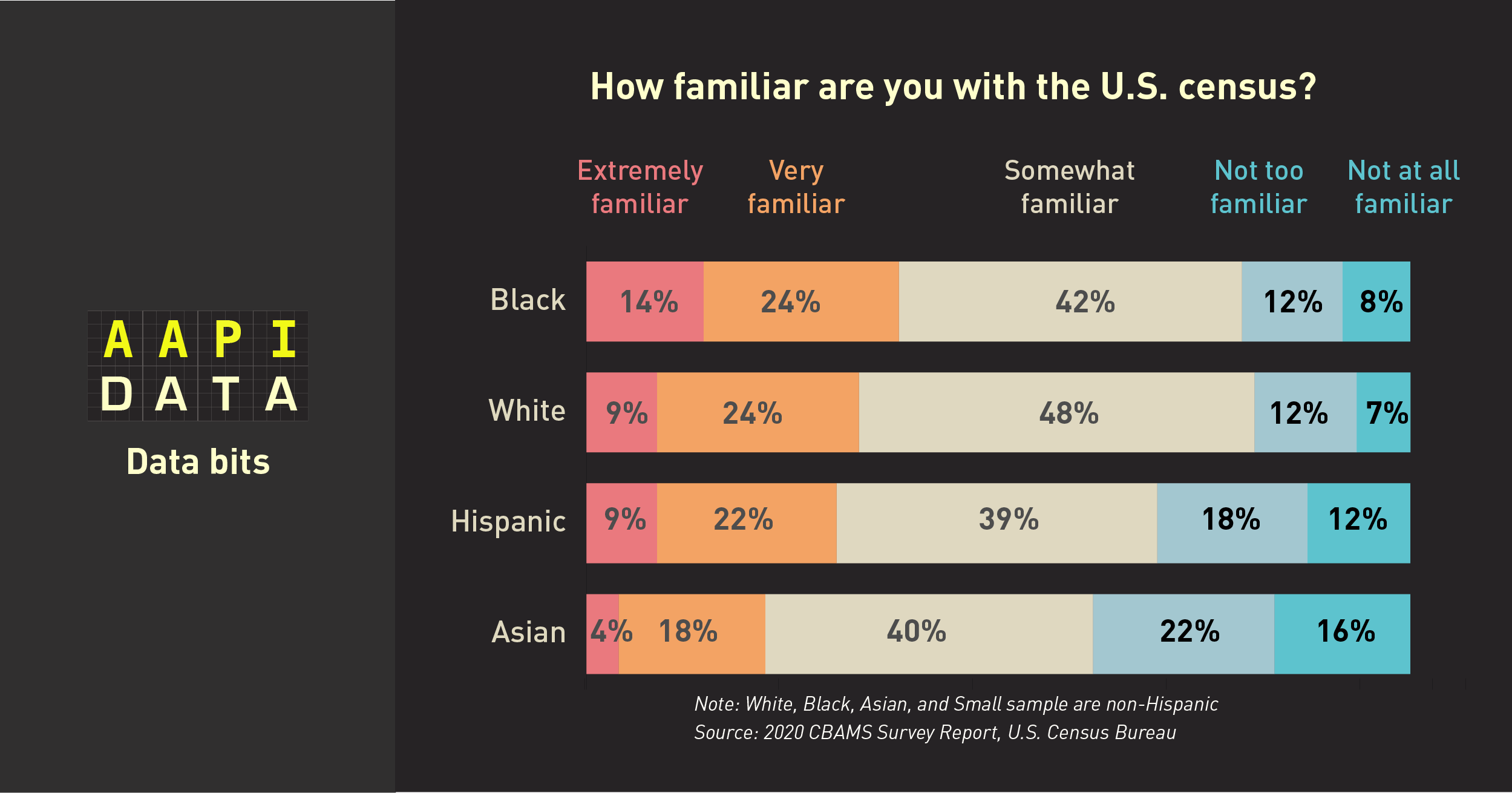 Menard said that a lack of trust in the government and unfamiliarity with the census were issues that plagued the Chinese American community specifically.

“It did ask some questions that were fairly personal, and for people who had grown up under a regime where they couldn’t trust the government, it was difficult to convince them,” Menard said.

Furthermore, the rapid growth that has taken place in the Chinese American community over the last decade meant that for many immigrants, 2020 was their first census.

“Because we are the fastest growing population, there are a lot of folks who weren’t even around a decade ago. So they don’t necessarily know the census,” Chen said. “That was why we invested in doing PSA videos in 28 different languages.”

Chen also discussed communicating with more insular, hard-to-reach groups by using apps that are more popular in the Chinese-American community, like WeChat, WhatsApp and KaKao.

“It’s closed off communities where people were sharing among their friends but they were not really educating themselves about how to identify what is dis- and mis-information. That was an added layer of challenges, as the community during the pandemic seemed to utilize more of these online spaces that were private,” said Chen. “This is where you really have to rely on shifting even more so to motivate individuals who have access to their family and friends. To actually have those harder conversations and be persistent.”

Despite the innovative outreach methods and language access initiatives, many community organizations are convinced that Chinese Americans and AAPI groups as a whole were undercounted in the 2020 census. Although the official demographic breakdown will not be released by the U.S. Census Bureau until the fall, projections based on statewide totals and congressional redistricting data indicate a potential for undercounting among minority groups.

“I think number one, they are undercounted. And number two, I think they’re also misrepresented,” said Menard. “If we could tease out only data on Chinese Americans, it still doesn’t give you a very good picture…Even if we narrow it down to just one ethnicity, it’s still a very wide range.”

Kelly Percival, counsel with the Brennan Center for Justice, acknowledged the possibility of an undercount, particularly when taking historical numbers into account.

“It is certainly possible that there was an undercount. And that would comport with all of history. You know, the census has never been perfect in any given year. And it has pretty much always undercounted certain communities,” said Percival.

With redistricting occurring as a result of the census, many AAPI advocacy groups are taking a more hands-on approach to avoid being shut out due to gerrymandering, and are hoping for a more conducive partnership with the current administration.

“The demographers and those who are part of the redistricting process, they probably don’t even know where our communities are located. We need to make sure at minimum they know that information when they put together the maps,” said Chen. “I think we’re still gonna have a lot of battles.”

Eva Nip, Lead Organizer at the Coalition for a Better Chinese American Community (CBCAC) said that they are focusing specifically on redistricting in the Chicago area in hopes of gaining more political representation.

“Ten years ago, we essentially redistricted in order for State Rep. [Theresa] Ma to be elected, who is a Chinese American representative for the area… so that was huge for us,” said Nip. “One of our goals is to also do a similar majority-minority situation by focusing on wards. So we have been talking about, like, what would it look like for a majority-minority ward for Chinese Americans? Because we don’t have any Asian American representation in any of the wards right now.”

Moving forward under the Biden Administration following the 2020 census may mean recuperating after a loss of resources due to undercounting, Menard said.

“I’m hoping that whatever came out of it, if the community lost some of the resources that we use in local government, especially in the city, like the alderman’s office… make do with what you have, Menard said. “You know, be creative. If you’ve lost resources, at least do your best,” .

In addition to redistricting and funding developments, the longer timeline of the 2020 census gives the Biden administration a unique opportunity to influence the usage of the data. Presidential administrations don’t typically inherit a census from the previous year, but because the Census Bureau needed an extension, Biden now has purview over the census conducted under Trump.

“Because they needed more time to process everything, the census was still ongoing when Biden took office. So he was able to do things like that executive order, which essentially halted all their efforts to collect citizenship data,” said Percival. “The Biden administration took over and has basically said, ‘we want accurate numbers.’ The census is the foundation of American democracy, and we’re stuck with the numbers for 10 years. So really, what matters is getting them right.”

Eva Nip said that she hopes the Biden administration will take all the necessary factors into consideration when making policy based on census data.

“I do hope that the Biden administration takes the census numbers into account, understands where people are at, and what can equitably represent our voices in a country with historical racism,” said Nip.

When asked about what they expect from the new administration regarding the census, community organizers expressed a need for a more thorough preparation process and more investment in transparency.

“Even if President Biden wins another election, he’ll be gone by then. There’s gonna be somebody else in 10 years. But I think they can lay the groundwork for the next one, now, so that they can avoid some of the problems that we had for the last one,” Menard said. “But in the meantime, we don’t want to wait another 10 years.”