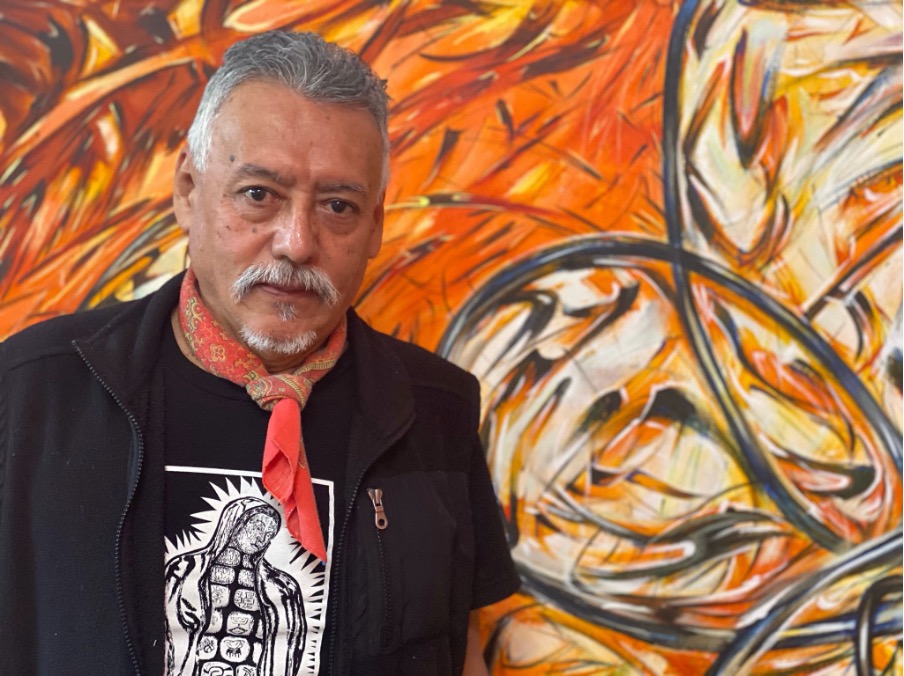 Hector Duarte unlocks the purple, wooden door to his studio — a building covered in a colorful mural, portraying a Mexican immigrant trapped under barbed wire, unable to move. As Duarte crosses the threshold of the building, the odor of acrylic paint and gesso dominates the atmosphere. Bright colors of red, yellow, pink and blue jump out of every corner of the room, with the butterfly in the center of every art piece — small butterflies, large butterflies, butterflies in cocoons and butterflies in cages. 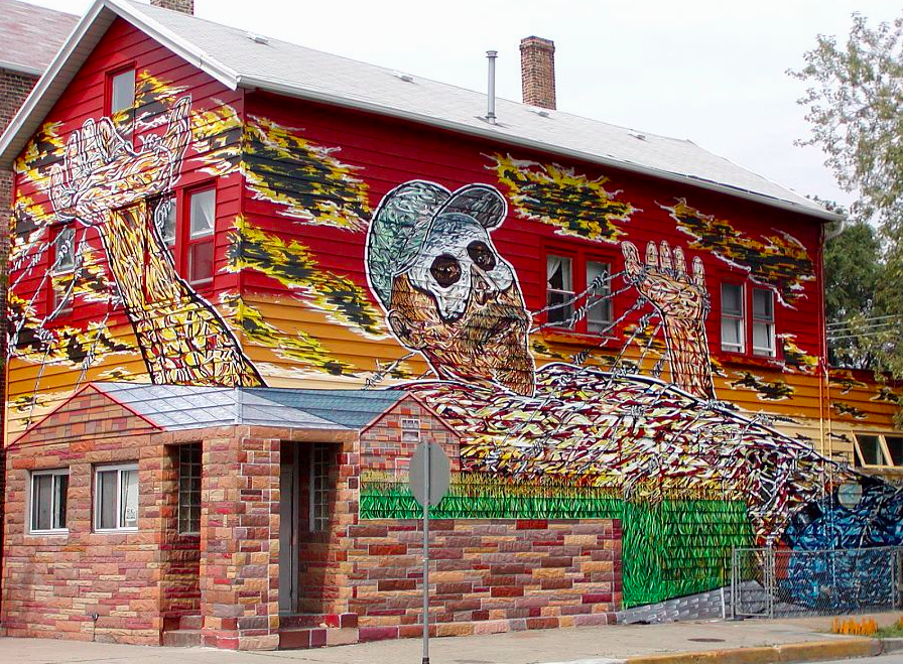 “Gulliver en el país de las maravillas (Gulliver in Wonderland)” The mural, adorning Duarte’s home and studio building, was inspired by Jonathan Swift’s Gulliver’s Travels and portrays a Latino Gulliver who crossed the border and is tied down with barbed wire, which represents the border. It comments on the immigration journey of his people and the difficulties of encountering a foreign land, with different language and culture, filled with resentment toward them. The wire that traps the man symbolizes both physical and cultural borders that immigrants face. According to Duarte, this immigrant feels like a giant, who has achieved great things so far and has overcome many difficulties, but at the same time is trapped by legal and cultural constraints. Duarte asks visitors: “Do you want him to remain trapped or break him free?” To free him and allow him to integrate fully, we must bring cultural and legal change. [Photo courtesy of Hector Duarte]

“I use the butterfly as a symbol of the migrant,” Duarte said. “The monarch butterflies migrate across three countries to go from Canada to Mexico, but they don’t need papers,” he added. “My people do.”

Duarte is a Mexican immigrant muralist, who moved from Michoacán, Mexico, to Pilsen in 1985, and has since found it difficult to integrate into this new community and culture. Through his artistry, he has found a creative avenue to tell the stories of adversity of his people.

His intention is to motivate the new generation of immigrants to embrace both cultures and stay connected with their roots —  their people, their community and their land —  while accepting and learning a new culture.

“It [migration] is expensive, it costs you, because you lose your human relation with your land and your people,” Duarte said. “We have to preserve our traditional heritage and take the best things from both cultures.”

“When I spoke English, people would not understand me. I didn’t know English and my pronunciation was not good,” he said.

Duarte’s accent was not the only thing that separated him from everyone else. His art was rejected by many Mexican artists, who painted in their own Chicano style, using bright colors and images of Mexican heroes. Duarte felt that he was losing his origin, his culture. But that’s when he started realizing that he had to leave some parts of his culture behind and embrace new ones. Even though it was hard.

“I started to change my concepts about art and started painting the same as the Chicano art, but in a different way, he said. “My intention is to create something a little more artistic and symbolic.”

Because of cultural differences in the United States, Duarte gained a deeper appreciation and love for his own Mexican culture. He learned to savor his roots through art, in remembrance.

Just like Duarte, many Mexican immigrants are able to find a cultural balance, embracing new traditions and new languages, while keeping old ones alive.

“We take advantage of this culture in America, but we continue with our culture,” Duarte said. “Por ejemplo. We eat tortillas here, bring all the food and ingredients and repeat the traditional ‘ceremony’ of making food. You re-create your culture and continue with this ritual and your home. And you talk in Spanish and celebrate the big celebrations in Mexico, the traditions.”

As an artist, Duarte also draws from his experiences living undocumented. Though he was documented when he moved to Chicago, his visa expired a few years later, after which he stayed undocumented until he got married.

“I felt that I was trapped in a box,” Duarte said. “I felt that any moment they would catch me.” 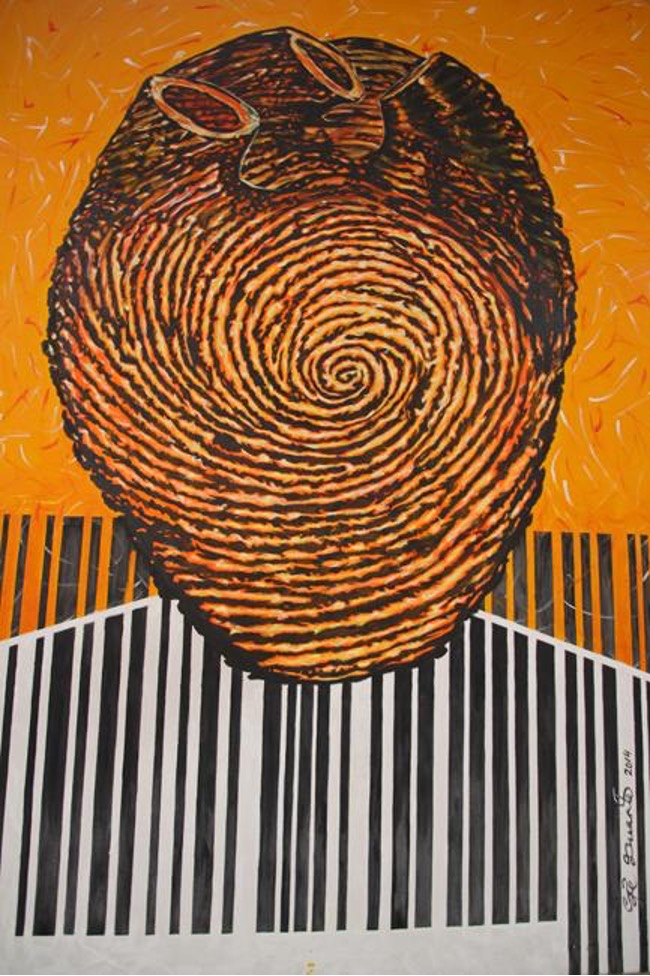 Immigrants’ fear and uncertainty of getting deported makes it difficult for them to integrate and plant deep roots in this new home. They feel trapped; trapped by the law, poverty, the inability to communicate, to understand the culture.

“When the police criminalize people, they take their fingerprints,” Duarte said. The piece to the right incorporates three different concepts of the heart, the fingerprint and the barcode. Duarte uses the barcode and fingerprint to highlight the objectification of immigrant people as cheap labor. He demonstrates the human and kind nature of immigrants who only come to the United States to work, take care of family and not cause harm. “Immigrants do not feel welcome in this country and find it difficult to integrate and plant roots, since they are not seen as human,”Duarte said. “For me, it represents the ID of migrant people.”

Duarte’s art speaks not only to his own experience integrating, but to other immigrants’ stories too.

The piece below represents the butterflies who migrate and survive all together, as one. At night, butterflies start moving to the trees, coming closer together and creating a bundle at the tree branch. Here, Duarte represents the unification of butterflies, which come together to provide warmth and security for one another, as with Duarte’s people, who migrate all the way from Mexico, but stay united and in touch with each other and their culture. With this piece at Mexico’s El Rosario monarch butterfly sanctuary, Duarte is also honoring two nature activists – Homero Gomez Gonzalez and Raul Hernandez Romero – who were killed. Duarte sees this act as a symbol of an attack against the butterfly migrants, who remain unprotected. 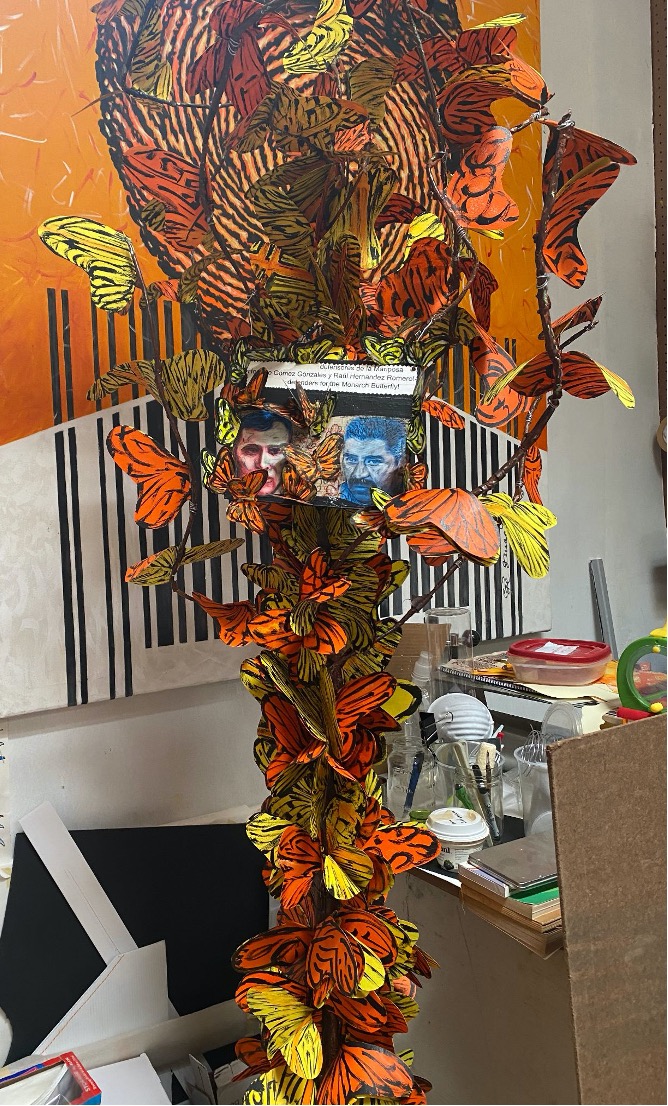 Erasmo Salgado, an art collector, who migrated to the United States from Acapulco, Mexico, had a similar experience.

“When I came to this country, to support my family, in the beginning it was difficult and scary. My English is not perfect and I have a lot of problems,” Salgado said. “But I do what I can.”

As an immigrant, Salgado is fascinated by Duarte’s artistic expression of immigrant life in the United States and feels connected to the cultural duality present in Duarte’s art.

“His work of free expression represents immigrants one way or the other and he uses different symbols, mixing Mexican and American culture,” Salgado said.

Duarte’s art conveys these struggles, as well as messages about the significance of taking a second step further and integrating both Mexican and US culture.

“The intellectual capacity of Hector Duarte, as an artist, has no limits,” Salgado said. “Duarte’s work for the immigrant community and the culture here inspires us and represents us. He expresses our people.” Salgado has collected 30 pieces of Duarte’s work.

With immigration increasing constantly all over the world, Duarte feels it’s important to create art for immigrants’ stories. He described life in the US as living in a segregated society, where we don’t make deep, cultural connections with each other.

“This is why I push the new generation to learn about your father’s and grandfather’s culture and take the best things from them and put them in this time,” Duarte said. “You need to open your mind and heart to create something for the new generation.”

“Sueño de un Carrito de Paletas (Ice Cream Dream)” The mosaic represents immigration. The butterflies symbolize immigrants. The butterflies extend all the way to the stairs under the train station where it’s installed, highlighting that everyone can go downtown and return from downtown, just like butterflies migrate in October from Canada to Mexico and start returning in March. The piece portrays Duarte’s commentary on the struggles of Mexican immigrants who move to the US, and despite their desire to return home, they never do. Duarte symbolizes the migration journey of people crossing borders and arriving in Pilsen, as a wave of energy, full of butterflies, with the city as a beating heart in the center. The piece connects the two countries, and thus the two cultures, which intertwine in immigrants’ lives. [Photo courtesy of Hector Duarte] 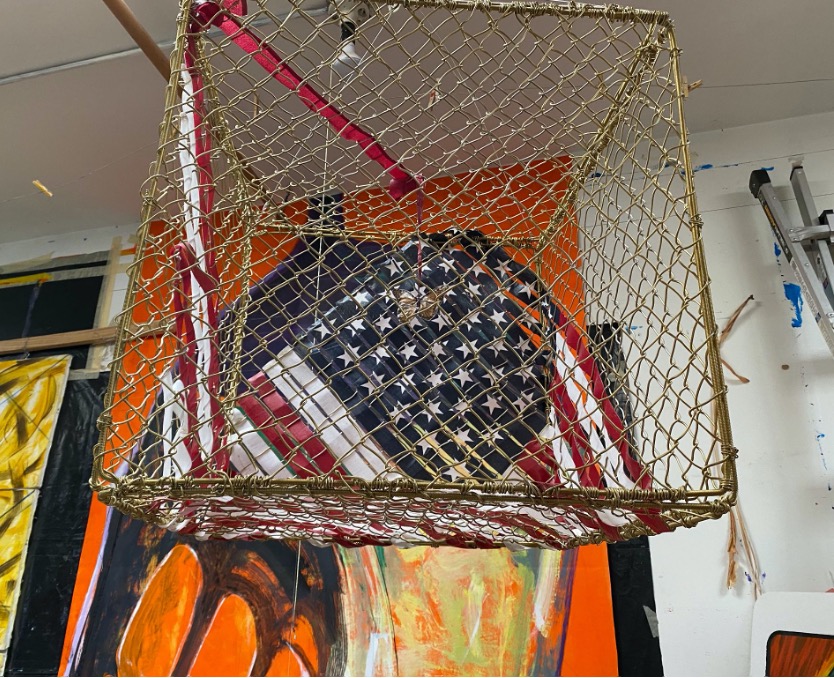 “Aunque la jaula sea de oro, no deja de ser prisión (Although the cage is made of gold, it’s still prison”) The piece represents migrant children living in cages. Duarte is commenting on their inhumane treatment at the border, where they’re isolated and separated from their families. The butterfly placed inside has a human body painted on it and represents the migrant, who is caged by the US. [Photo credit: Melina Chalkia] 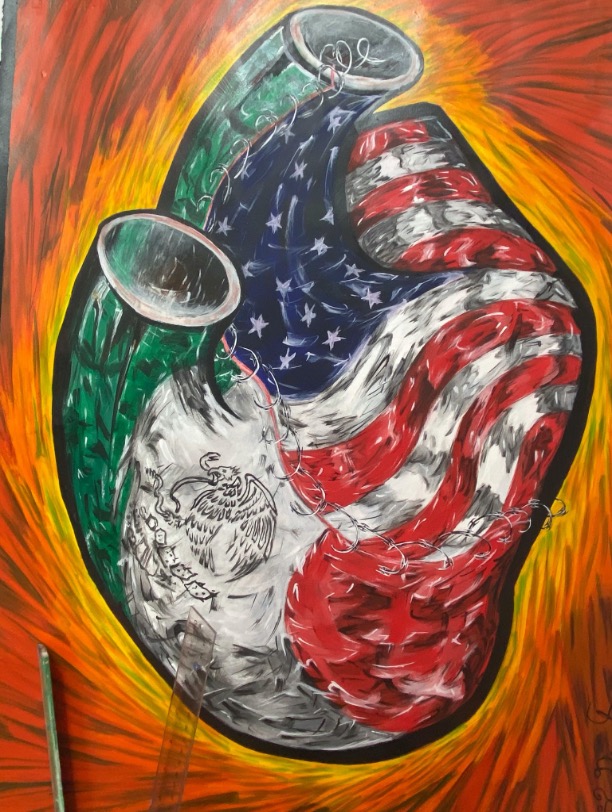 With the piece Duarte represents the two cultures. “It’s a young heart who was born here or lived here early in life, but it’s divided by two cultures, two flags,” he said. The heart has barbed wire around it, representing the separation of the two cultures and their people. “It’s like when you have open-heart surgery and they try to heal the heart with stitches; but the wall never disappears,” he said. With this piece, Duarte represents the difficulty of Mexican immigrants to integrate into this new society and combine the two cultures. “We survive in this city together, which is very segregated, but we have to open our minds and learn from another culture and keep the peace,” he said. “We are the same; we are human beings. Why do we fight?” he added. [Photo credit: Melina Chalkia]

The piece portrays a warrior eagle with the body of a migrant and wings of Latin American flags. By covering the mouth of the eagle with the American flag, Duarte symbolizes the oppression of immigrants by the United States, which silences their voices. The eyes of the warrior embody the strength and determination of Latinos in embracing their culture and identity, while also achieving social equality. The figures marching underneath the eagle are leaders from Latin America and represent inspiration and wisdom for the migrant people; Duarte comments on the struggles of the migration and integration journey. [Photo courtesy of Hector Duarte]] 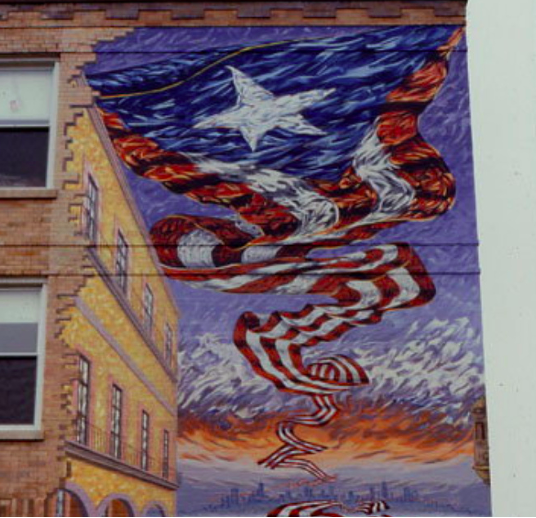 Duarte has painted the flag of Puerto Rico, which starts at San Juan and crosses the sea to reach Chicago. The flag then seems to be returning to Puerto Rico, but this time, it returns more powerful and with more knowledge. In the piece, Duarte portrays the idea that you can learn about another culture, while also enforcing your own culture and traditions. He symbolizes the strength of his people in integrating the American culture with Latin American culture. [Photo courtesy of Hector Duarte]