How will Biden’s infrastructure plans affect gentrification in Pilsen?

After her parents relocated from Mexico to Pilsen in the early 1950s, Victoria Romero found the place she calls home. She feels that the Pilsen community where she’s now lived her whole life strengthens her Mexican-American identity.

Romero doesn’t want to lose that feeling of belonging. But as she grew up and went to college, she noticed some changes starting to happen in the neighborhood.

“As I got older and started learning more about politics and how gentrification happens, I started noticing that that’s exactly what was going on here in Pilsen,” Romero said. “The displacement of working class people, rehabbing apartments and then renting to another demographic, in this case mostly white students or people who could pay more rent than your typical working family, which in this neighborhood happened to be mostly Mexican or Latin American.” 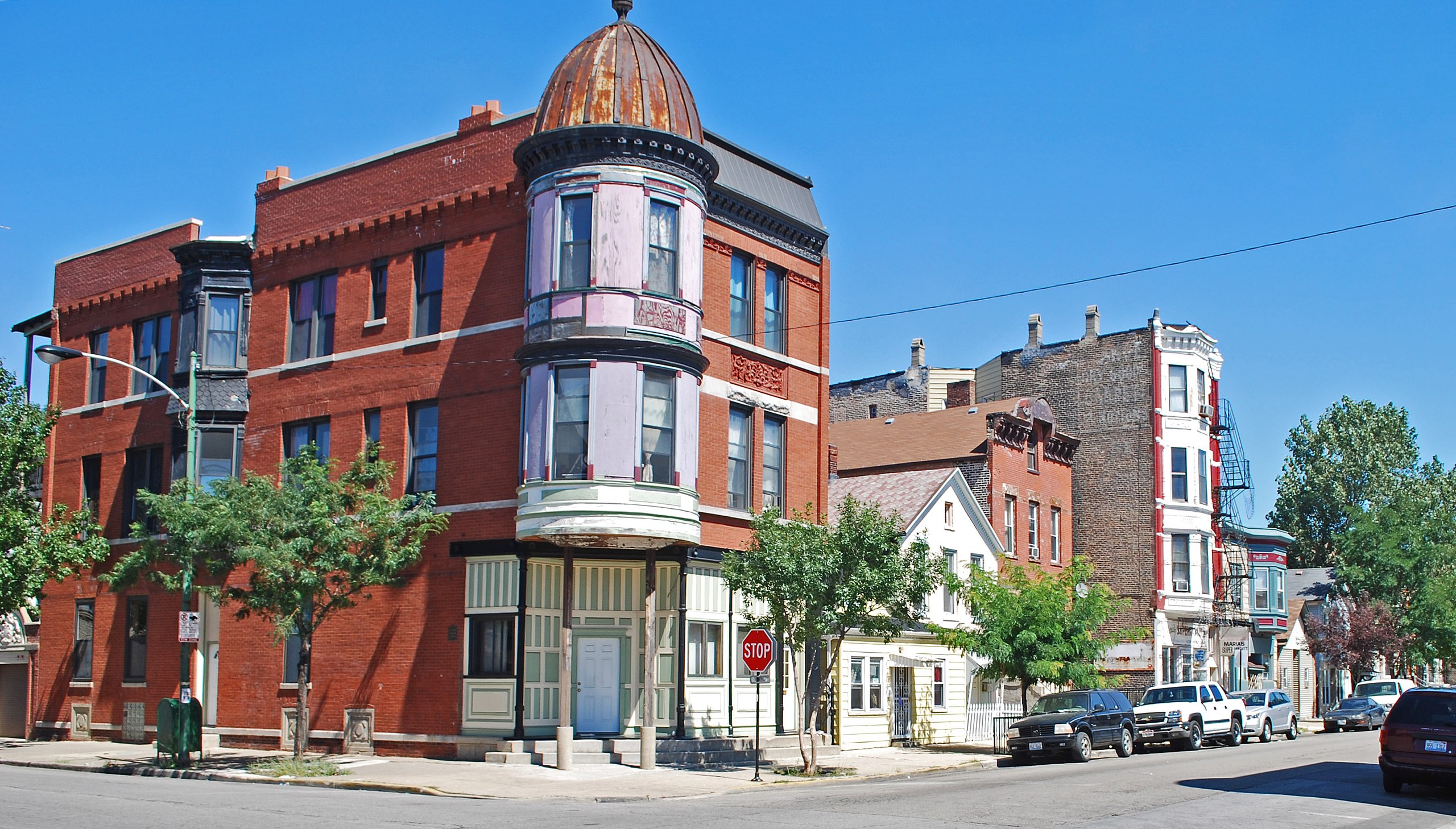 Pilsen, a neighborhood on the near south side in Chicago, is rich in Mexican immigrant culture, and being slowly transformed by an ongoing influx of affluent residents and real-estate developers. Due to gentrification, rents and property taxes have increased, overthrowing low-income Latino families.

With Joe Biden taking office as President, could such essentially local dynamics get thrown off course as a result of federal policies that are mostly intended to provide relief from a year of the covid epidemic? With Biden’s new infrastructure plan, for instance, what can the Mexican immigrant community in Pilsen expect regarding exclusionary zoning?

Due to Pilsen’s long history of gentrification, it’s difficult to hold out hope for the future.

“Gentrification is very systemic, and intentional,” Romero said. “You have a history of Pilsen being one of the most disinvested neighborhoods throughout the ’70s and ’80s, and because of the culture that we’ve brought into this neighborhood, all of a sudden, it has become a very hot area.”

As more developers are drawn to the richness of the Pilsen community and to zoning laws that favor single-family homes, low-income families are being displaced. Between 2000 and 2010, the Latino population of Pilsen decreased by 26%, according to the US Census Bureau.

“There’s a lot of resentment for those of us who are lifelong Pilsen residents, towards the systemic removal of working class people and the people who have invested their time and money and energy into building such a beautiful community,” Romero said.

Romero has been involved with the Pilsen Alliance, a nonprofit organization fighting for affordable housing and advocating against gentrification in Pilsen. With the work of many organizations like Pilsen Alliance, there has been a strong resistance against exclusionary zoning in Pilsen, which is a foreign concept to many Spanish-speaking residents of the community.

“In this barrio we have gentrification and we fight investors or real-estate, or every person who comes with money to buy,” Duarte said. “It’s not easy for one family now to buy a house and our intention is to make opportunities for neighborhoods, to not increase the tax.”

Despite the ongoing opposition, Pilsen is still seeing some of the effects of complicit policy making and political corruption at the local government level.

“Unfortunately, that impact is still wreaking havoc on our neighborhood,” Romero said.

Diego Morales, who has partnered with Pilsen Alliance, has also witnessed the continuing zoning of low-income, Latino immigrant families in Pilsen. Morales said that landlords jack up the rent prices to kick out working-class families and rebuild the demographic population and the identity of the neighborhood.

“They start buying things at different stores, rather than the local economy that exists here and they have different social norms,” Morales said. “Especially when you have white affluent people coming into the neighborhood, they’re much more ready to do things like call the police if they see certain kinds of activity, which further criminalizes people who live here.”

According to Morales, racial bias in homeowners and landlords has encouraged different tactics to push somebody out. Apart from increasing the rent, they might try to intimidate them out, either through the intentional neglect of the unit or by threatening people with calling immigration authorities.

Developers prey on people who are hurting financially, and the pandemic makes people all the more vulnerable.

Discriminatory zoning policies, which target low-income residents who cannot afford single-family homes, are still in place and prohibit the construction of multifamily units, which are the only units that can be afforded by immigrant families in Pilsen.

In a recent report entitled “Tearing Down the Walls: How the Biden Administration and Congress Can Reduce Exclusionary Zoning,” the Century Foundation makes the case that Biden’s campaign provides hope and evidence that His administration is inclined to tear down the government-sponsored walls “that keep Americans of different races and classes from living in the same communities, sharing the same public schools, and getting a chance to know one another across racial, economic and political lines.”

The president appointed as the secretary of the Department of Housing and Urban Development Representative Marcia Fudge, who has fought for the decrease of racial and economic segregation in family neighborhoods. Biden also appointed Susan Rice as head of the Domestic Policy Council, the main objective of which is racial justice.

Even though there is federal policy that protects residents from residential discrimination and exclusion, zoning occurs on the local government level.

Biden plans to execute a trillion dollar infrastructure bill that would increase local budgets and allow the construction of affordable multi-family apartment buildings, reducing zoning for only single-family homes. The bill has not yet passed, but it is scheduled for a vote in the U.S. House of Representatives on June 9, according to Reuters.

This investment is crucial in providing affordable housing for low-income immigrant families in Pilsen and there is a lot of faith in its effectiveness to reduce gentrification.

Legal advocates are supporting Biden’s proposal, as a small step in the right direction, and believe it could succeed. With the shortage of housing, it’s time to eliminate entry barriers that enforce racial and economic segregation, which have long impacted immigrant communities, argues Sam Spiegelman of the CATO Institute, a think tank that advocates libertarian principles.

With the Biden administration, working class families in Pilsen are expecting to see some changes regarding affordable housing and socio-economic segregation in the neighborhood. The community’s optimism with Biden’s new infrastructure bill is founded on the small cultural changes the neighborhood has seen regarding immigration.

“There are also cultural aspects,” Morales said. “Under the Trump administration, you had wrangling elements in the community that ‘oh I know the federal government has my back if I want to put people away.’ Now, that still exists, but from what I have seen there aren’t large cases or nearly the amount of instances as during the Trump administration.”

Romero also echoes the feeling of cultural change that has resulted from the fight against gentrification in Pilsen, as well as the shift in administration.

“As a resident, I appreciate that our voices have been heard,” Romero said. “To have people displaced out of their homes, to me, is an injustice.”

By increasing multi-family units, low-income immigrant families will be able to afford homes. But what about the intentional displacement of immigrant families? Even though Pilsen residents acknowledge and appreciate Biden’s plan to increase housing, they know that it is not sufficient to fully eradicate gentrification.

“It’s true, we certainly do need more housing,” Morales said. “But, I think that’s a bit of a Trojan horse argument, because, yes you build more housing, but how can we make sure that people who really need the housing have access to it, people who have been displaced out of a community to repair the harm of gentrification?”

Morales is also concerned about completely erasing the existing community and its identity.

“There are a lot of economists who might call on the side effects of building more unit housing: you’re building more density, you’re bringing people in, but those people will have more income, will have different spending habits, different social norms from Pilsen,” Morales said.

The effects of gentrification, in regards to Biden’s new infrastructure bill, must also be addressed in light of the COVID-19 pandemic. Even with the pandemic, which has negatively impacted many working-class residents who are jobless and cannot pay rent, housing prices are still increasing due to exclusionary zoning.

Pilsen residents are unsure of the effectiveness of Biden’s proposal because of the uncertainty of the pandemic. According to Morales, the future is scary because the economic effects of the pandemic haven’t been addressed yet.

“I think the pandemic makes things very volatile,” Morales said. “It’s kind of a two-edged sword, because the pandemic basically slowed down the economy for a while.”

Because of this economic hindrance, the onslaught of luxury development projects, high-dollar investment and gentrification slowed down too, according to Morales. However, there is a flip side.

“At the same time, it put a huge financial squeeze on the homeowners that existed, the families who lost their jobs or lost someone and had to pay the funeral costs,” Morales said. “The avenue if you have property is to sell.”

Because of the effects of the pandemic, it’s still hard to tell what the future of Pilsen, regarding gentrification, looks like. But Pilsen is putting up a strong fight with a positive outlook, waiting for Biden’s bill to bring some effective change.